Exploring China’s Yangtze River is one of the world’s longest rivers and key to the success and survival of China. Snaking its way high on the Tibetan Plateau, covering thousands of kilometres,  and finally making its way to the Eastern China Sea near Shanghai. A portion of the Yangtze has become a popular sightseeing destination for many since the development of the Three Gorges Dam. There are a number of cruise operators taking passengers on journeys along one of the most scenic parts of the river between Yichang and Chongqing, a journey of four nights upstream (or three nights downstream).

A long-held belief is that the Yangtze River is the cradle of Chinese civilization. Many sites, both cultural and historic, have been found along the banks of the Yangtze.  Cruising along the Yangtze allows visitors a unique insight to the ancient heritage as well as the bonus of some spectacular views and landscapes.

I embark on my four night journey with Victoria Cruises, an American-owned cruise operator. I am travelling with a group from Wendy Wu Tours and the Yangtze River cruise is a part of the Majestic Yangtze tour we have all been looking forward to.

We embark our ship in Yichang, a bustling city; put on the map through the popularity of these river cruises and the dam project. The dam itself is located around 45 minutes outside of Yichang. As we drive through the city, it is evident that westernisation  seen so far in other cities of China hasn’t reached this far as yet; we pass street-side stalls of strange looking fruits and vegetables, local people going about their everyday life and playing Mahjong outside their shops. 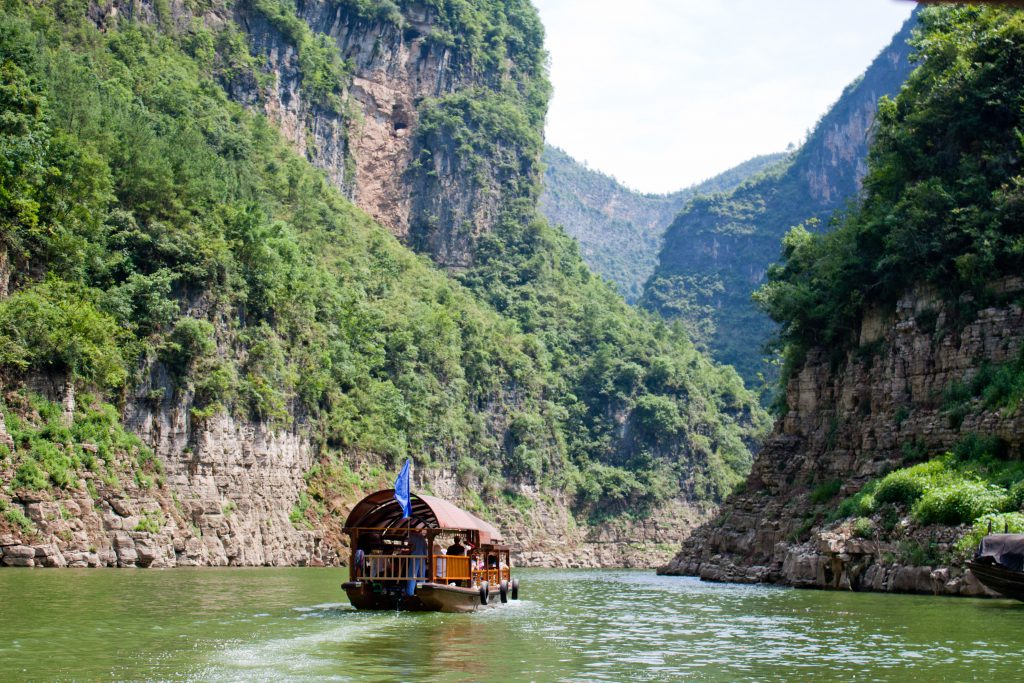 We check into our cabins on the ship in the early evening. The cabins are clean, cosy and comfortable. There is a small balcony and a bathroom and information waiting on the bed about our itinerary for the coming days. The ship departs the dock as I settle into my cabin for the night and fall asleep to the gentle hum of the ship.

The following morning after breakfast, we disembark and board buses that travel to the top of the Three Gorges Dam site. Construction began on the project in 1994 and was completed in 2009. It is the world’s largest water conservancy project. The Three Gorges Dam is 2,335m long and 185m high. Passing through the ship locks of the dam gives a real sense of the enormity of the project as we pass through each of the gates. This process which took a few hours was of great interest to some.

The river level in the area was raised by 175m. This created a 600km-long reservoir with the purposes of flood control, electricity generation, improved navigation and access to irrigation. The trade-off of this immense project was that 570,000 acres of farmland, villages, and cities in 19 counties were flooded. Over 1.5 million people were relocated and resettled in new towns and communities. As you cruise along, it is hard not to think about the flooded towns that lie beneath the water and the people who were displaced.

We pass through Xiling Gorge, the longest and deepest of the Three Gorges. I enjoy the sun on the main deck to make the most of the viewing opportunities. At times our ship feels dwarfed by the landscape. The cragged peaks of the cliff walls rise high along the sides of the ship. Many poets have referenced the beauty of this area and legend has it that many ships sunk along here prior to the dam project which has calmed the waters.

In the afternoon, we enjoy an optional tour to the Tribe of the Three Gorges. This tour allows a glimpse into life on the river in the Xiling Gorge. The local people have taken much effort to showcase their cultural heritage and traditions. The water is very green and traditional boats, fishermen, houses and traditional dress can be seen during the time spent here.

In the evening, we enjoy a Captain’s Dinner and entertainment put on by the cruise staff. I wander around the ship to see what is on offer on board. There is a room where some people are playing an intense game of Mahjong. Probably not the time to interrupt and learn how to play! Some ladies are off to have a massage. Most passengers though are relaxing at the bar, enjoying the rainbow of cocktails on offer.

The next morning, we transfer to a small boat for a serene journey along Goddess Stream, located within Wu Gorge. Hidden away along a small, peaceful tributary, the water is an emerald green colour. At times the shore line seems so close, that we could almost reach out and touch the sides. 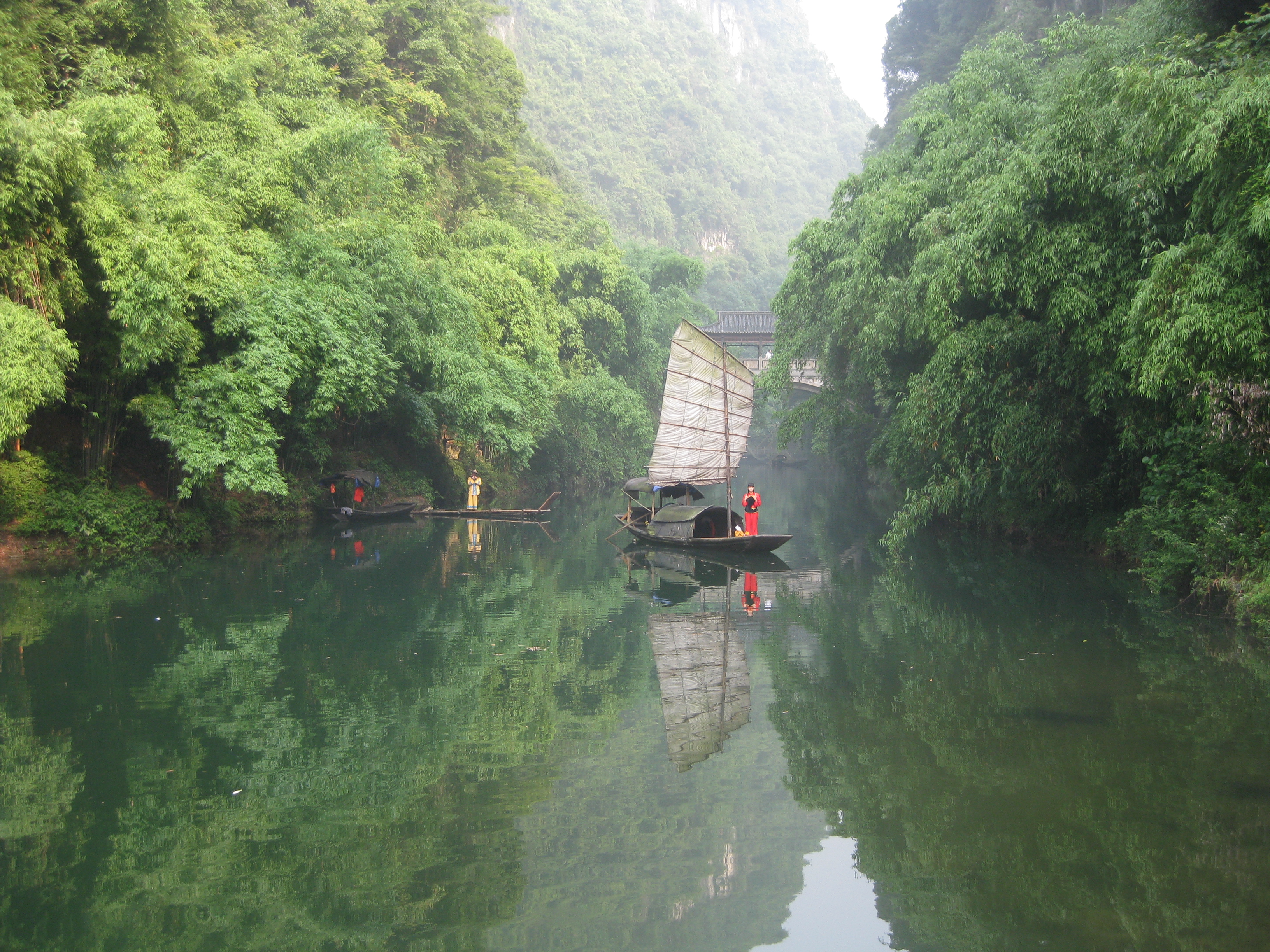 Tributary of the Yangtze River

It is an up-close insight into how the locals utilise the river. We return to the main area of Wu Gorge, surrounded by forest-covered mountains and sheer cliffs. We then cruise through Qutang Gorge, the shortest, narrowest and most dramatic of the Three Gorges.

Our final shore excursion on the third day of cruising is to Shibaozhai on the northern bank of the Yangtze. This is a striking red, wooden pagoda that seems to hug one side of the hill. 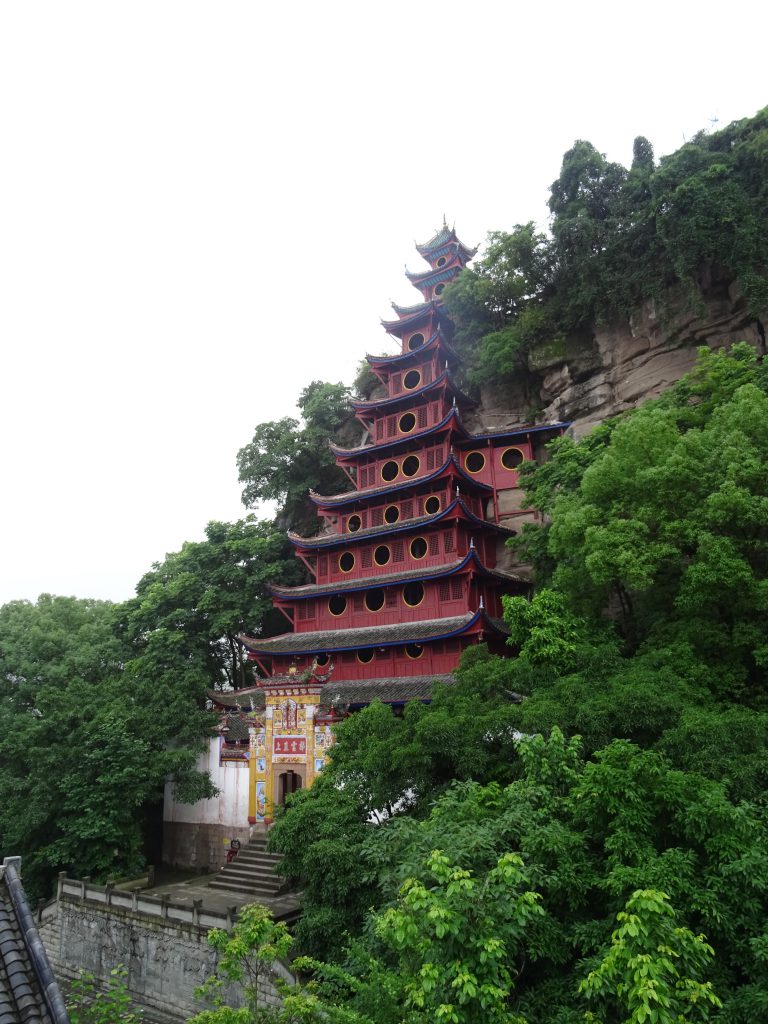 Built in the 18th century and made up of 12 storeys, it consists of a yellow gateway decorated with lions and dragons, a tower body and the top temple, named Tianzi Palace.

The tower has an extraordinary design, known as one of China’s architectural wonders, as it was built without using any nails.

During the early hours of the morning, we arrive at the dock in Chongqing, China’s most populated city. After breakfast, we disembark to continue our adventures on the Majestic Yangtze tour.

It has been a relaxing and interesting break from the big cities and busy streets while cruising the Yangtze. Witnessing first-hand the effects of the Three Gorges Dam and the desire of the local minorities to maintain their traditional lifestyles in the face of this, was intriguing. The Yangtze River is the lifeline of China and the stunning vistas on offer here are not to be missed.