Kate Middleton and Prince William recently left the kids at home to embark on a royal visit to India and Bhutan. Let’s take a look at the royal itinerary.

On this whistle-stop tour, they explored iconic sights across these two magical places. Ending their trip with a visit to the UNESCO World Heritage Listed Taj Mahal, visited by Princess Diana in 1992.

The aim of the visit was to “contribute to the ongoing partnership between Britain and India. An opportunity to build on the friendly relations between the UK and Bhutan”. They returned to the UK just in time for the Queen’s 90th birthday.

If you are inspired by William and Kate’s tour India and Bhutan, here are our suggestions for the sites you really must not miss.

India is one of the most popular destinations for the Royal family to visit, with many generations travelling there over the years. The Queen visited in 1961, and Prince Charles has made eight official visits to the country, along with several other members of the Royal family. Prince William and Kate Middleton last travelled to India in November 2013.

Prince William and Kate Middleton began their Royal tour in Mumbai on 10th April, with a trip to the
Oval Maidan, an oval-shaped park in Mumbai’s south, where locals gathered to watch the Royals try their hand at a game of cricket.

They also visited the ancient tank attached to the Walkeshwar Temple Complex, Banganga Water Tank, which is dedicated to the Hindu god Shiva. 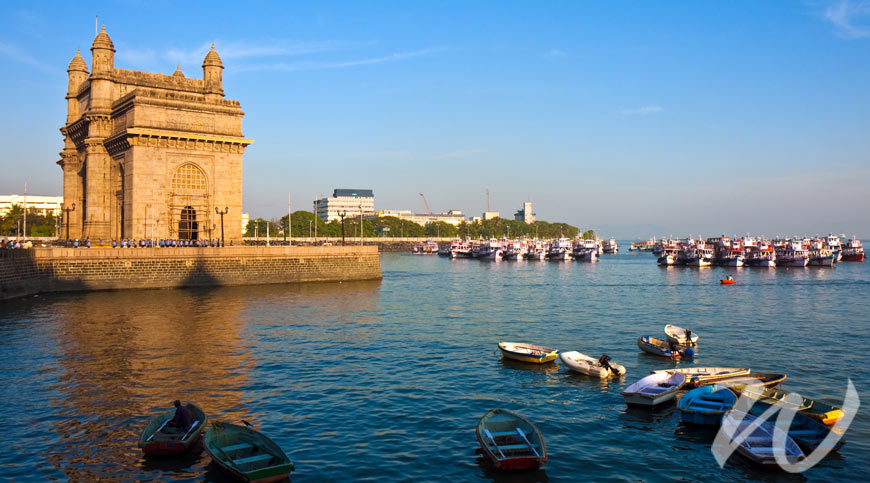 On 11th April, the Royal Couple arrived in Delhi, commencing with the laying of a wreath at India Gate, a war memorial dedicated to the thousands of Indian soldiers who died in World War One.

Embarking on an open-top safari, the royals spent a day with elephants and rhinos at the Centre for Wildlife Rehabilitation in Kaziranga National Park. The UNESCO World Heritage Listed Park is located in the Northeast corner of India. It holds the largest number of one-horned rhinoceroses in the world. Nearby to the park, Kate and William also visited some local tea plantations. Enjoying a sample of the finest tea in the country. You too can explore the Kaziranga National Park on a wonderful cruise of India’s Brahmaputra River. 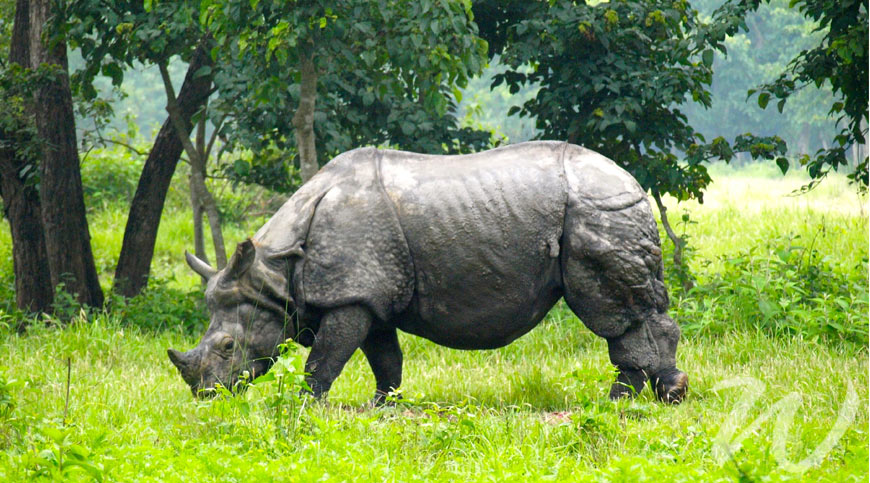 Following their time in Bhutan, the couple returned to India for their final stop on the tour – the UNESCO World Heritage Listed Taj Mahal in Agra. Princess Diana famously visited this site in 1992. Her photo sitting in front of the monument is one of the most and replicated iconic photographs in history. The Taj Mahal is a mausoleum just outside of Agra. Construction work was completed in 1653, and the monument houses the tomb of Mughal Emperor Shah Jahan’s favourite wife. When the emperor Shah Jahan died, he chose to be laid to rest alongside his wife within the monument.

The Taj Mahal is one of the most iconic buildings in the world and features on the ‘bucket-list’ of many travellers. You can visit this marvellous site on many of our tours including our introductory tour, Golden Triangle, featuring Delhi, Agra and Jaipur.

This was the couple’s first visit to Bhutan, a nation nestled in the mountains between India and China. Bhutan is known as the “happiest country in Asia”. They measure their quality of life with GNH (Gross National Happiness) rather than GDP. This mountainous country is landlocked away high in the Himalaya and only opened to tourism in the 1970s. Bhutan is filled with beautiful natural landscapes and offers an array of temples that are awaiting your exploration. The Bhutanese people provide a warm welcome.

Prince William and Kate Middleton spent just two days in Bhutan, however, they definitely shone a spotlight on this delightful nation. Plan your own awe-inspiring journey to this beautiful country on our Land of the Thunder Dragon tour. 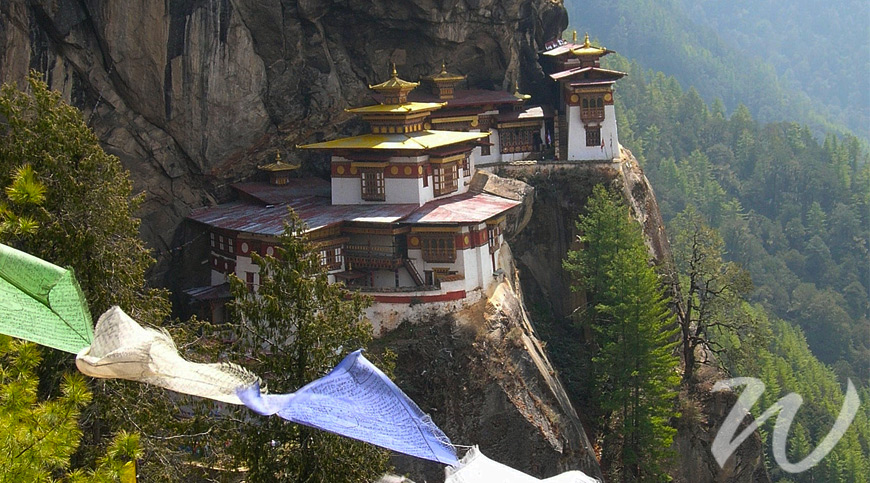 In Bhutan, Dragon King Jigme Khesar Namgyel Wangchuk, who became king in 2006, and his wife, Queen Jetsun Pema, hosted the royals, welcoming them to the country’s capital, Thimphu, on 15th April. The famously sporty couple then tried their hand at Bhutan’s national sport: archery.

The Tashichho Dzong is a Buddhist Monastery in the capital of Bhutan, Thimphu. It is also known as Trashi Chhoe Dzong or Thimphu Dzong. The Monastery contains thirty temples and shrines within its walls, which Prince William and Kate visited on 15th April. Interestingly, the current King’s coronation was held at the monastery in 2008. The Monastery is also the location of the annual Tsechu Festival. 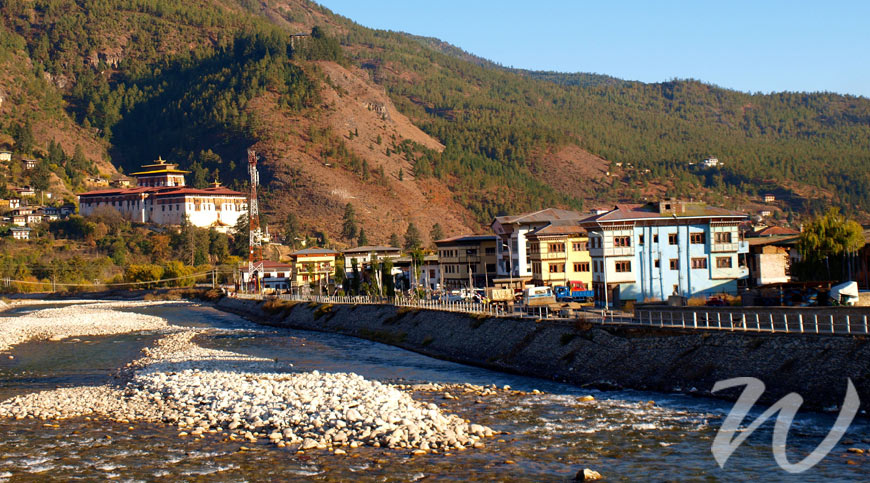 Paro Taktsang (also known as Tiger’s Nest) is an awe-inspiring Buddhist temple tucked away on the cliffs above Paro Valley, at a height of 3,120 metres above sea level. Tiger’s Nest is where Guru Padmasambhava was said to have meditated for three years, three months, three weeks, three days and three hours in the eighth century. Thus introducing Buddhism to this Himalayan kingdom. The Royal Couple walked the eight-kilometre trail to the Tiger’s Nest on 15th April.

Wendy Wu Tours offer several different tours to India. Each encompasses the highlights and covers all those must-see attractions, including the spectacular Taj Mahal. Spend nine days visiting Agra, Delhi and Jaipur on the Golden Triangle.

If you are looking to travel to one of the most rarely-visited countries on earth and embrace a culture that values happiness over wealth, then our escorted private tour, Land of the Thunder Dragon is for you. This tour will take you through many parts of the country over seven days. Which will be sure to leave you with long-lasting memories of this magical country.

If you want to explore India, Sikkim and Bhutan on one concise tour, our 24 days Himalayan Kingdoms tour is perfect for you.