A Note From Wendy

South America. The very idea of the continent conjures up images of lost empires, mysterious civilisations and natural landscapes beyond compare. For many years, my returning guests have asked me “Wendy, I love Asia, but I have already seen it all with you!  Where else can you take me?”. So, it has long been a dream of mine to share the richness of this area with my returning guests. I have just returned from seven weeks exploring her wilds, her cities and her cultures, and so I am delighted to share with you, my guide to your first time visiting South America. I hope you enjoy it as much as I have, and that it wets your appetite for the adventures that await you.

The South America that you’ve always dreamed of, and certainly the most famous of all the sites in South America, first timers must visit the famously preserved Incan citadel of Machu Pichu. The city ruins that are steeped in mystery sit 2,430 metres above sea level and are another UNESCO world heritage listed site. It is believed to have been built as grounds for Emperor Pacachuti in 15th century, and quickly abandoned upon the arrival of the Spanish. Machu Pichu’s speedy desertion paired with the fact that it was never found by the colonisers have been key to the preservation of its structures and terraces. Locals have always known about Machu Pichu, but it only entered mainstream consciousness thanks to the research of Historian Hiram Bingham. In 1911, Bingham was searching for “lost city of the Incas”, when a local farmer alerted him to the site. Comprised of a series of crumbling buildings, and over 3000 steps across five miles, the site remains firmly at the top of travellers Bucket Lists.

SEE IT ON… Best of Peru and Colombia 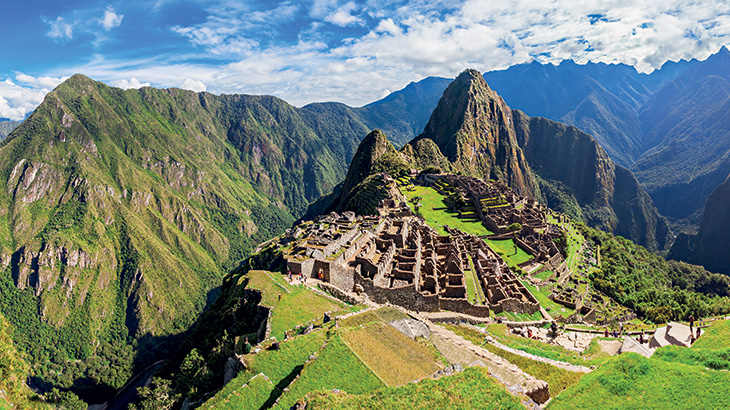 At South America’s largest lake, the pace of life slows down. Located at the north of the Altiplano basic, high in the Andes on the border of Peru and Bolivia, a visit to Lake Titicaca is to step back in time to highland cultures, steeped in traditional life. Here, plateau’s stretch for miles and crops are still harvested by hand. Located on the shores of Lake Titicaca, it is an easy sail to the acclaimed Moon and Sun islands, where women still wear petticoats and bowler hats. There are also plenty of opportunities to get up close and personal with Alpacas. Limas and Vicunas 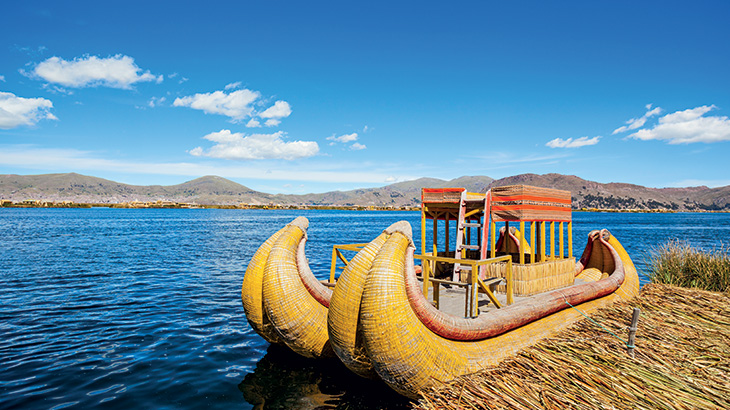 Resplendent with colour and with cobblestones underfoot, Cartagena sits on the Caribbean coast, an old city dripping with romance of bygone times. Sat within a huge 13kms of colonial city walls, the Old Town is a recognised UNESCO World Heritage site, where balconies are heavy with bright flowers and mazelike alleyways are the perfect place to dawdle. Within the town, a number of colonial churches tower over the lanes, creating shady spots, perfect for resting, and above, the Castillo de San Felipe fortress rises high on the hill of San Lazaro. Set aside any preconceptions you may have about Colombia, Cartagena is the country’s most popular destination, with neighbourhoods of Bocagrande and Manga inviting tourists from all over the world to explore her beauty. This is not a place to tick off lists, this is a place to relax and soak up the magic of where South America meets the Caribbean.

SEE IT ON…Best of Peru and Colombia 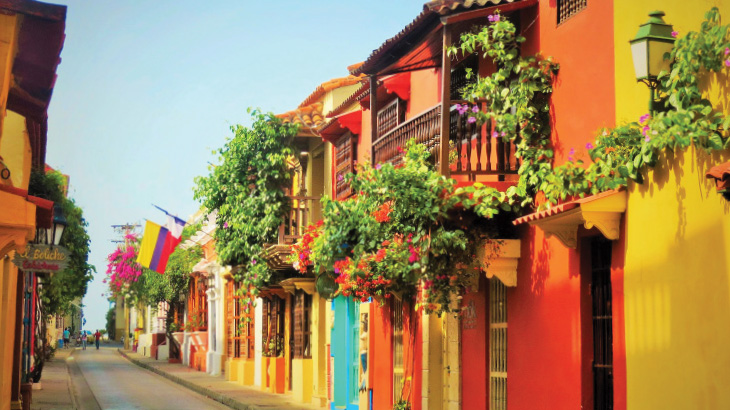 The heartbeat of South America! The cosmopolitan capital of Tango, Asado (bbq) and Mate tea, Buenos Aires is an extremely diverse and cultural city. Often coined the Paris of South America, Buenos Aires reputation as a romantic and lively city is completely justified. Plaza de Mayo, an elegant nineteenth century central square is at the heart of the city and has witnessed the most significant events in Argentine history. Visitors should explore the antique shops in San Telmo, Buenos Aires’ oldest neighbourhood and La Boca where you can walk the celebrated Caminito (little street), admiring the beautifully coloured buildings. Tigre, is perhaps Buenos Aires’ best kept secret, a popular weekend destination for locals defined by its position on the banks of the Parana Delta. Marinas, mansions and rowing clubs are commonplace here and there are many water based activities available. Buenos Aires is a long-time favourite of travellers, with a throbbing heartbeat of music, food and wine. 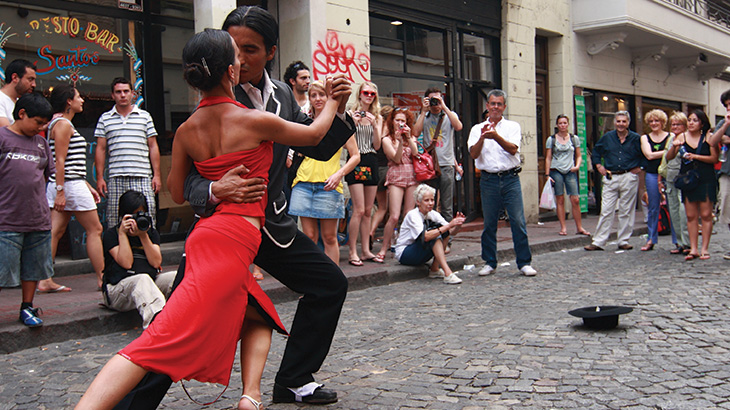 Powerful and fierce, when first lady of the United States, Eleanor Roosevelt laid eyes on the tumbling waters of Iguazu falls she is reported to have uttered “poor Niagra”! An astute observation as Iguazu falls is truly impressive and visitors are often gobsmacked at the sheer power of the waters here. The scale of the falls is massive, spanning more than 2.7 kilometres and consisting of more than 275 individual waterfalls and cataracts and defining the border between Argentina and Brazil. Travelers to the falls are best to visit both the Argentinian side of the falls and the Brazilian side of the falls with each having its own dramatic views and vistas. A train ride to the most impressive observation point – the Devils Throat is a must do!

SEE IT ON…Essence of Argentina and Brazil 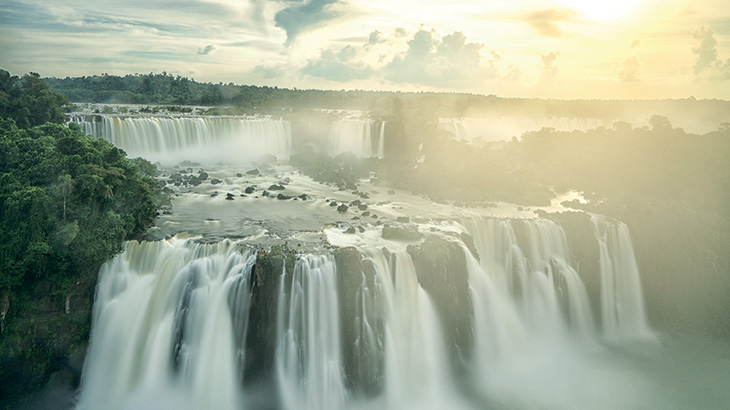 From one iconic image to the next, Rio de Janeiro is Brazil’s most famous city. The energetic and unrivalled seaside city of Rio is home to so many highlights; Sugar Loaf Mountain, Copacabana, Ipanema beach and the noisy and rhythmic Carnaval. At the centre of the city at the top of Tijuca Forest sits the instantly recognisable Christ the Redeemer. Traveling through the forest to the peak on the lively cog train is an enchanting experience. With arms wide open the statue and his visitors share extraordinary views of the city and the surrounding bays and islands. Copacabana and Ipanema are more than beaches, they are some of Rio’s liveliest neighbourhoods and strolling along the promenades is an essential Rio experience. Make sure to taste the incredible street foods Rio has to offer but beware Brazilians sure do have a sweet tooth!

SEE IT ON…Rhythms of Brazil 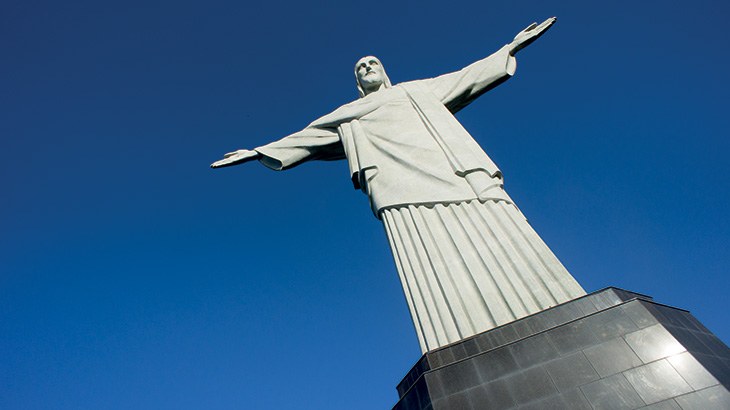 Grand and rugged, the mighty mountainscape of Torres del Paine National Park, is one of the continent’s most pristine ecosystems. Wander under snowy mountain peaks, around aquamarine lakes, and even hear landslides tumbling in the distance. The park is most famous for its namesake which translates to ‘The Blue Towers’, enormous jagged granite towers that you cannot miss. Between the icebergs, grasslands and lakes Torres del Paine is a visual feast for the eyes and a buffet of sensory experiences.

SEE IT ON…Chile: Top to Toe 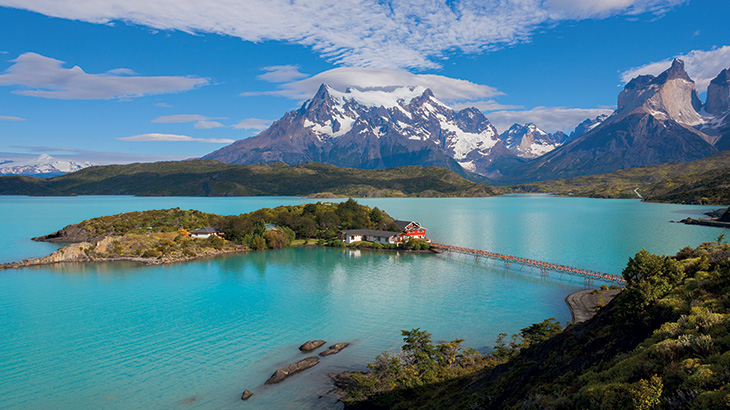 Ancient and silent, the Perito Merino Glacier lies quietly yet spectacularly in Los Glaciares National Park, in Argentina Patagonia. A colossal remnant of the Ice Age, thirty kilometres long, five kilometres wide and sixty metres high, the glacier is viewable from a platform that allows visitors to get up close and personal, even watch giant icebergs calve off. From the Brazo Rico side of the lake you can even be lucky enough to witness one of the massive ruptures that sees an outpouring of water into the body of the lake. 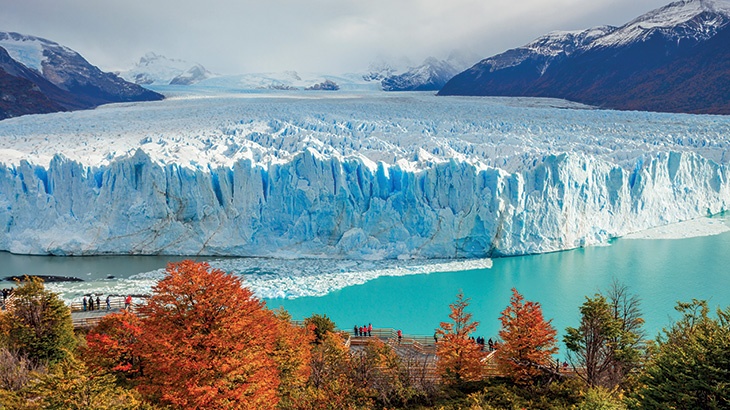 The Amazon Rainforest is the world’s largest tropical rainforest, while the Amazon River is the world’s longest river, passing through seven countries. Manaus, the capitol of Amazonas in the North of Brazil is the gateway to the Amazon. The largest city in the heart of the world’s biggest jungle, Manaus is host to some amazing and exclusive experiences. Animals and humans interact in unimaginable ways, sloths are common throughout the city getting into all sorts of mischief, and pink bottle nose dolphins work with local fisherman for a share of the catch. From Manaus travellers can access the world’s most life-giving river. Giver of life to the flora and fauna on her banks, the powerful Amazon river also supports life across the planet, generating twenty percent of the world’s oxygen
and housing half of the worlds estimated 10,000 species. Wander through her dense jungle, or sail down one of her tributaries, her waters are filled with exotic animals like the mythical pink dolphin and the hungry piranha.

SEE IT ON…Rhythms of Brazil 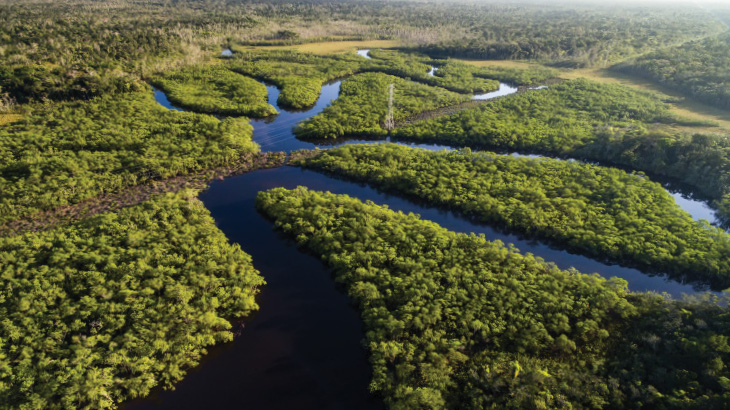