When I first hear the word “desert,” I think hot, dry, and lifeless. However, The Gobi Desert is anything but lifeless. The Gobi is a place where it rains in summer, snows in the winter, but it is still dry and flat. You might be surprised to see life in the desert. One special plant that is only found there, called the Saxon, is one of the many unique life forms.

The Gobi desert also has a very extreme climate. One day you could be so cold you’ll be wrapped up in scarves, hats, and gloves, and the next day you’ll be so hot where you don’t even want to move.

Don’t let the bipolar weather stop you from seeing just all the Gobi has to offer, from the Flaming Cliffs to the Singing Sand Dunes. The Flaming Cliffs, natural red-orange sandstone cliffs, are well known not just for their “flaming” appearance—especially at sunset—but also this is the area where the first dinosaur eggs were found. Although it is unlikely you will find any dinosaur footprints, you may get to hear the sound of the wind blowing the sand on the Singing Sand Dunes. This big yellow sand dune might fool you into thinking you are in the Sahara desert until you look behind you and see beautiful rocky mountains, green grass, and a lively stream. 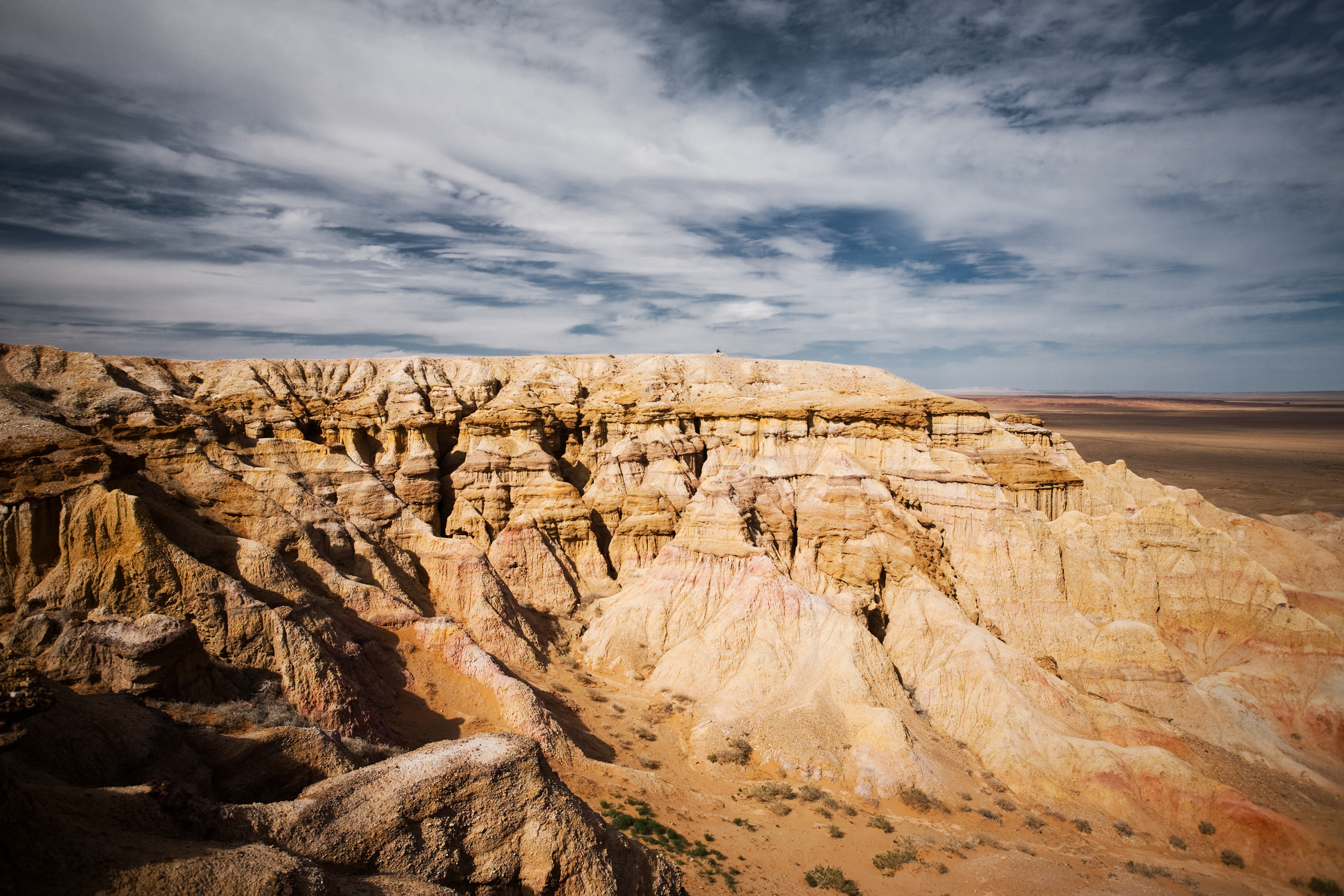 Camping in a traditional style Ger camp really lets you have the feeling of what it would be like to live like a Mongolian Nomad. Don’t worry though, you won’t be completely unplugged or out of touch from the outside world and what you are used to. Over the centuries, while still outliving the traditional lifestyle, these nomads have developed to using modern technology. Some even make calls to their family in the city! So you still can charge up your phone or camera batteries, but it is recommended to bring extra charging plugs. As camps do have them available, the slots can become filled very fast especially at busy camps that may have as many as 80 people.

Another thing these camps come with is heat and air conditioning! This heat and air conditioning are all natural; the ways the tents are made make sure you stay warm when it is cold and cool when it is hot. When it is hot out, there is an open frame window on top, a wooden wall section which you can open the curtains, and a door that faces to the south, so when winds from the northwest come through, it becomes cool inside. When it is cold out, the tents are covered with thick felts and sheep wool; a fire is lit in the middle so where the tent warms very fast. 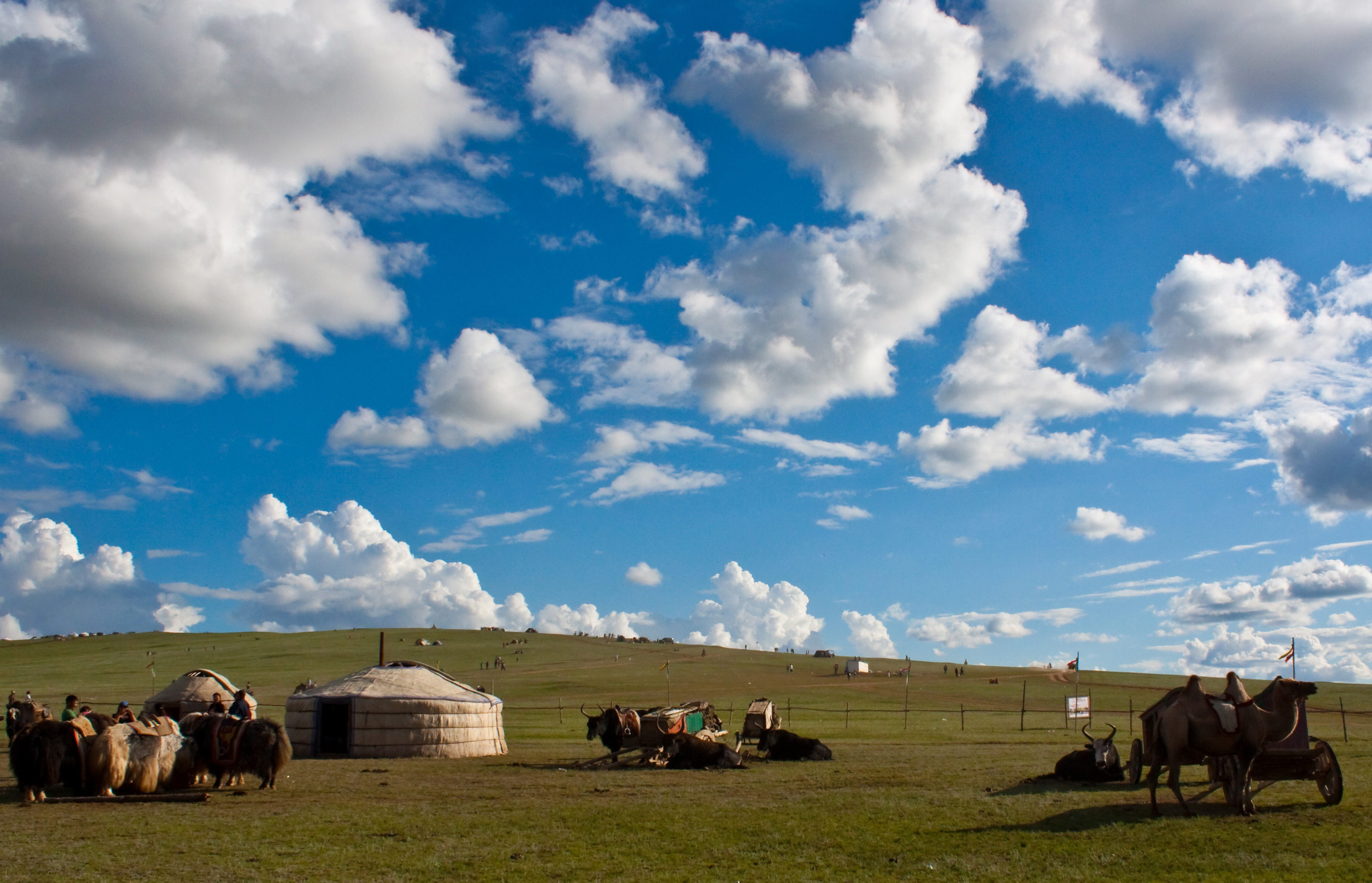 Many people don’t expect Mongolia to have an urban city life, but are nicely surprised by Ulaanbaatar, the nation’s capital. Ulaanbaatar is a fast developing city with 1.3 million people living there. Since this city is developing so rapidly over the past 5-10 years, there is still a lot of construction underway. People can expect to see poor infrastructure conditions.

There is a wide variety of culture mixes in the city as well. Ger districts in the suburbs, where people have taken their traditional housing accommodation from nomadic to settled. There are many Russian style apartments that date back to the Socialist Time in Mongolia. Ulaanbaatar even has a modern Shangrila 5-star hotel! 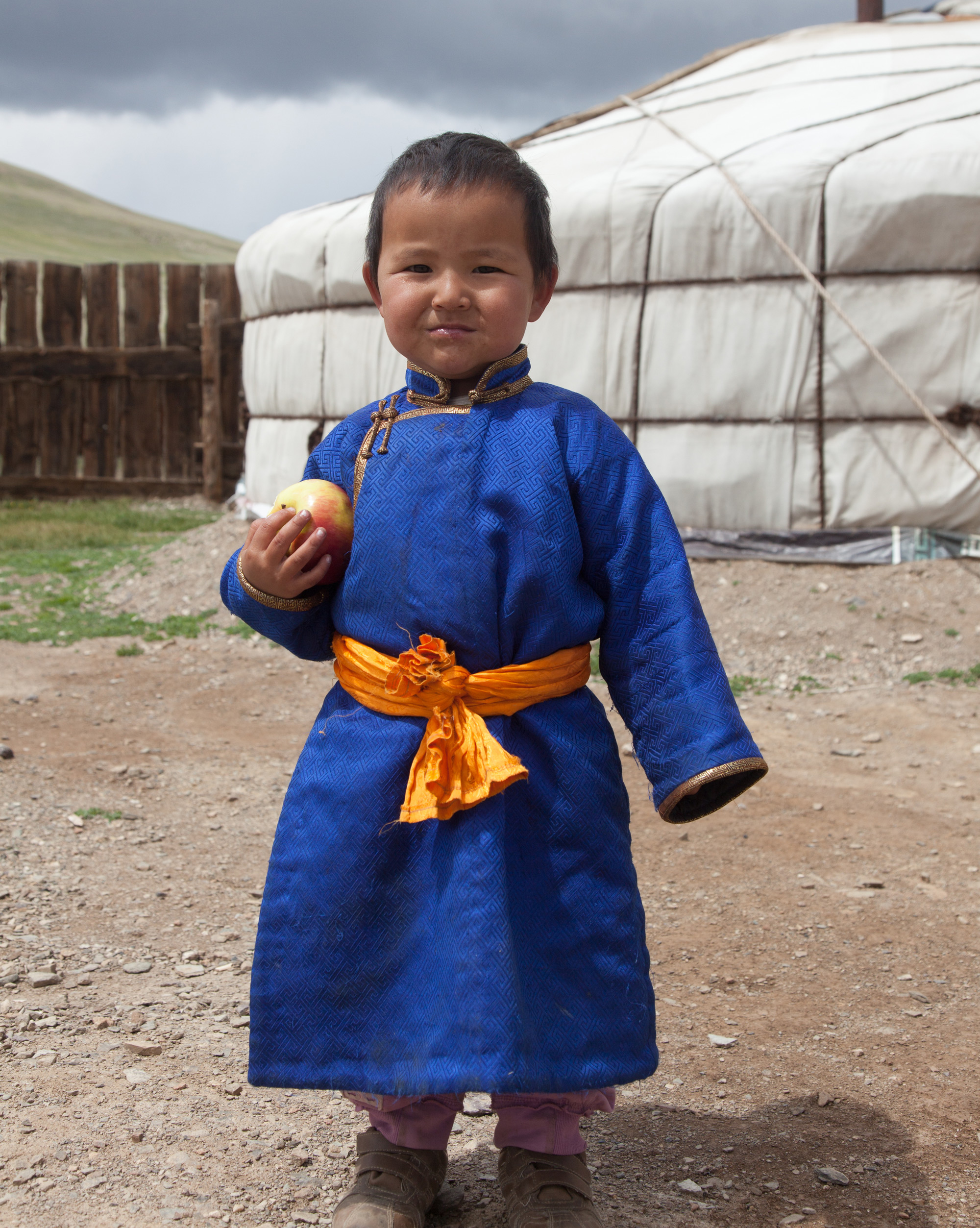 Mongolia is notable for eating lots of meat; almost all of the Mongolian dishes are based on meat. This meat is 100% natural meaning that there is no meat farming; all the animals are free to graze and eat whatever they find in nature. Sauces are not very common, as meats are often flavoured with basics such as onion, garlic, and salt. Meat is not the only thing eaten there, which some people have come to believe, just that all other food and veggies eaten with the meat is imported from other countries.

Some traditional, well-known Mongolian dishes are Khorkhog, Boodog, and even horse-meat. Khorkhog is a hot stone mutton barbeque cooked in a pot. Boodog is similar to Khorkhog except in the way it is cooked. It is cooked inside the skin or cavity of a gutted animal. For this reason, big animals are not suited to be cooked this way; marmot Boodog used to be the most common, but it is not illegal due to marmot disease. Horse-meat is much more commonly eaten in the winter because it is a “warm-blooded animal” so the meat tastes much fresher when it is cold out.

In Ger camps, you are likely to eat more traditional style Mongolian dishes, but there are still plenty of westernized dishes to be found and eaten in restaurants. 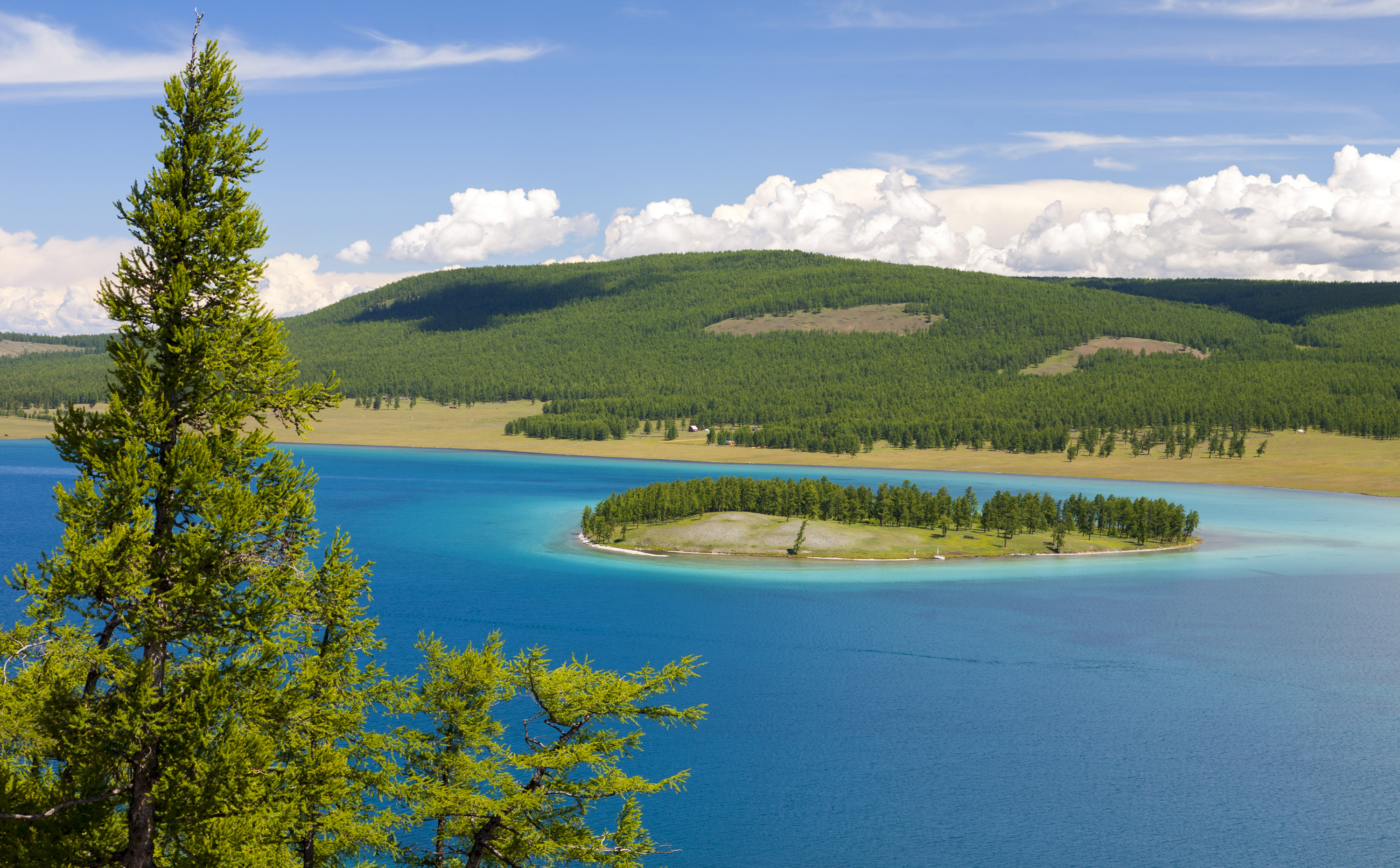 Translated, Naadam means festival. As some people describe it, this is Mongolia’s national version of the Olympic Games. It falls on July 11th and 12th, and it is one of the biggest celebrations all year. Many people like to wear national costumes to show their pride for their country and during the festival, special festival food is eaten.

There are three national sports that take place during this festival. They are wrestling, archery, and horse racing. Horse racing is very different than what the western world expects. The jockeys are very young, between the ages of 8 and 15 years old. They do not use a saddle either, because, well… the lighter, the faster! There are five different types of horse races that are all based on the horses’ age. These races are enjoyed and loved by everyone, especially the nomadic culture; they feel very close to the horse. 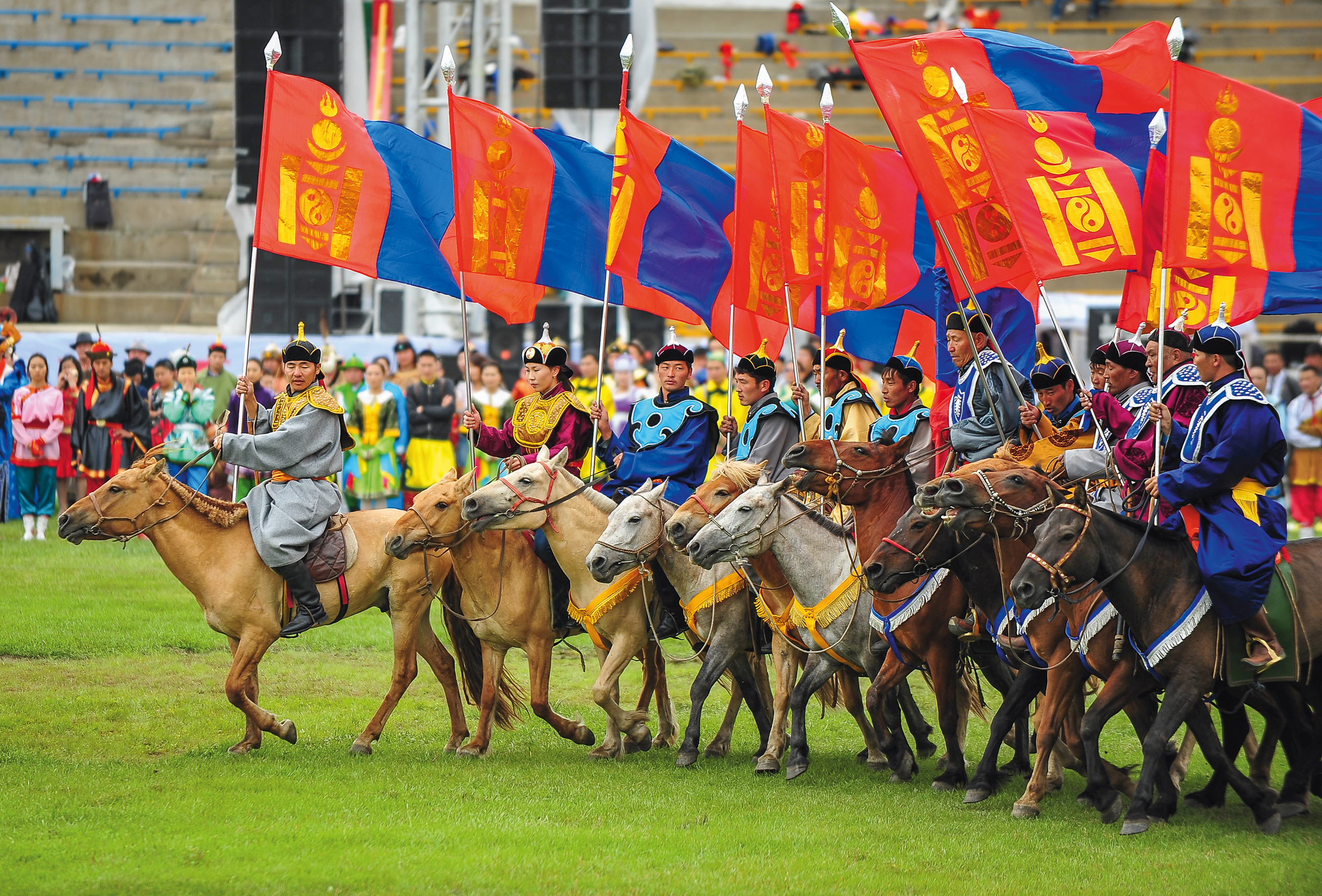