Wendy Wu Tours team member Lachlan Burnet recently travelled on our Jewels of Japan tour. Anticipating a modern country, with neon signs and high tech-gadgetry, Lachlan was pleasantly surprised by the timeless aspects of traditional Japan. He described it as ‘captivating, entrancing and fascinating’.

Lachlan shares his fond memories of his step back in time during his Japan tour, including the must-see highlights, customs and culture from days gone by… 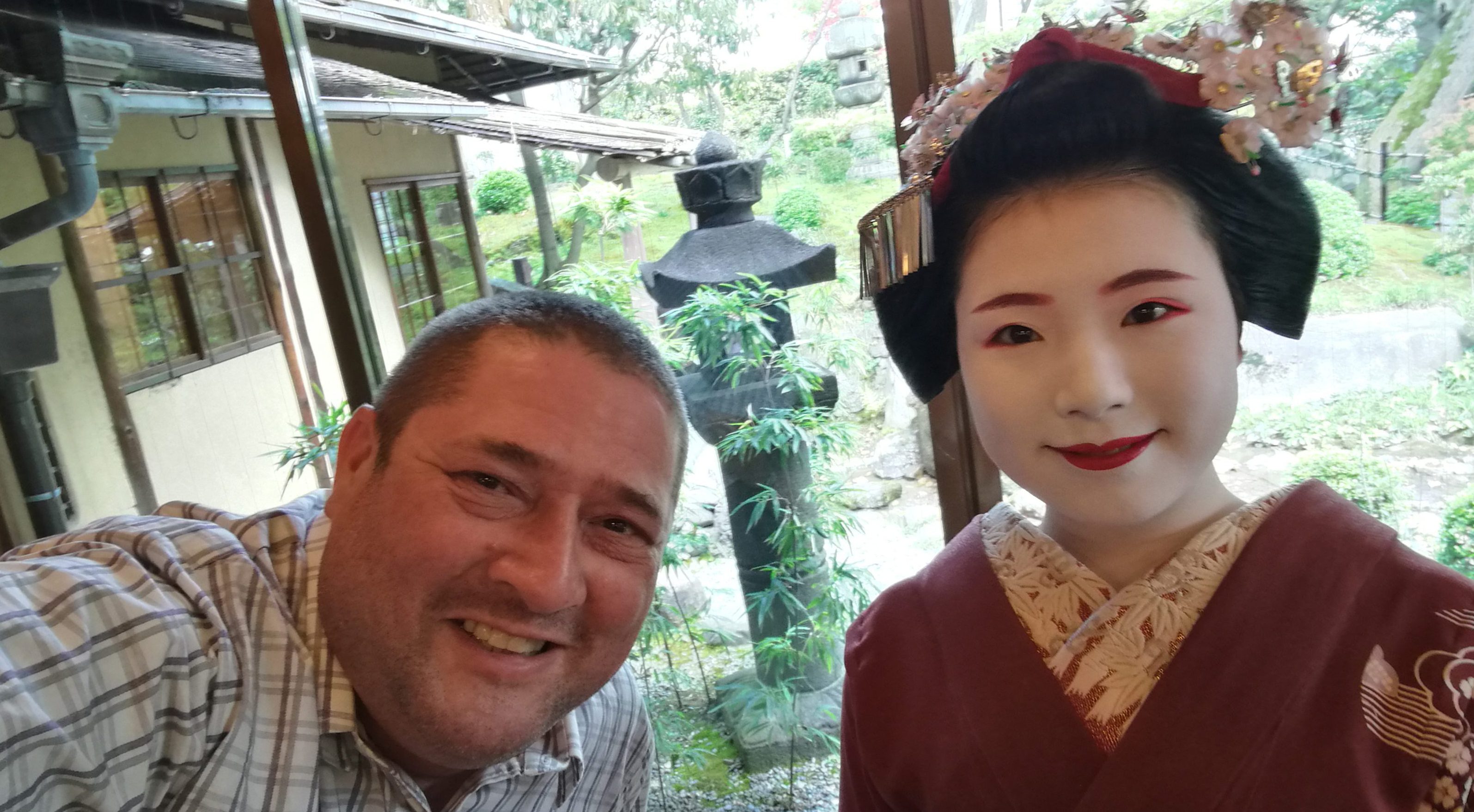 Lachlan meeting a Maiko in Kyoto 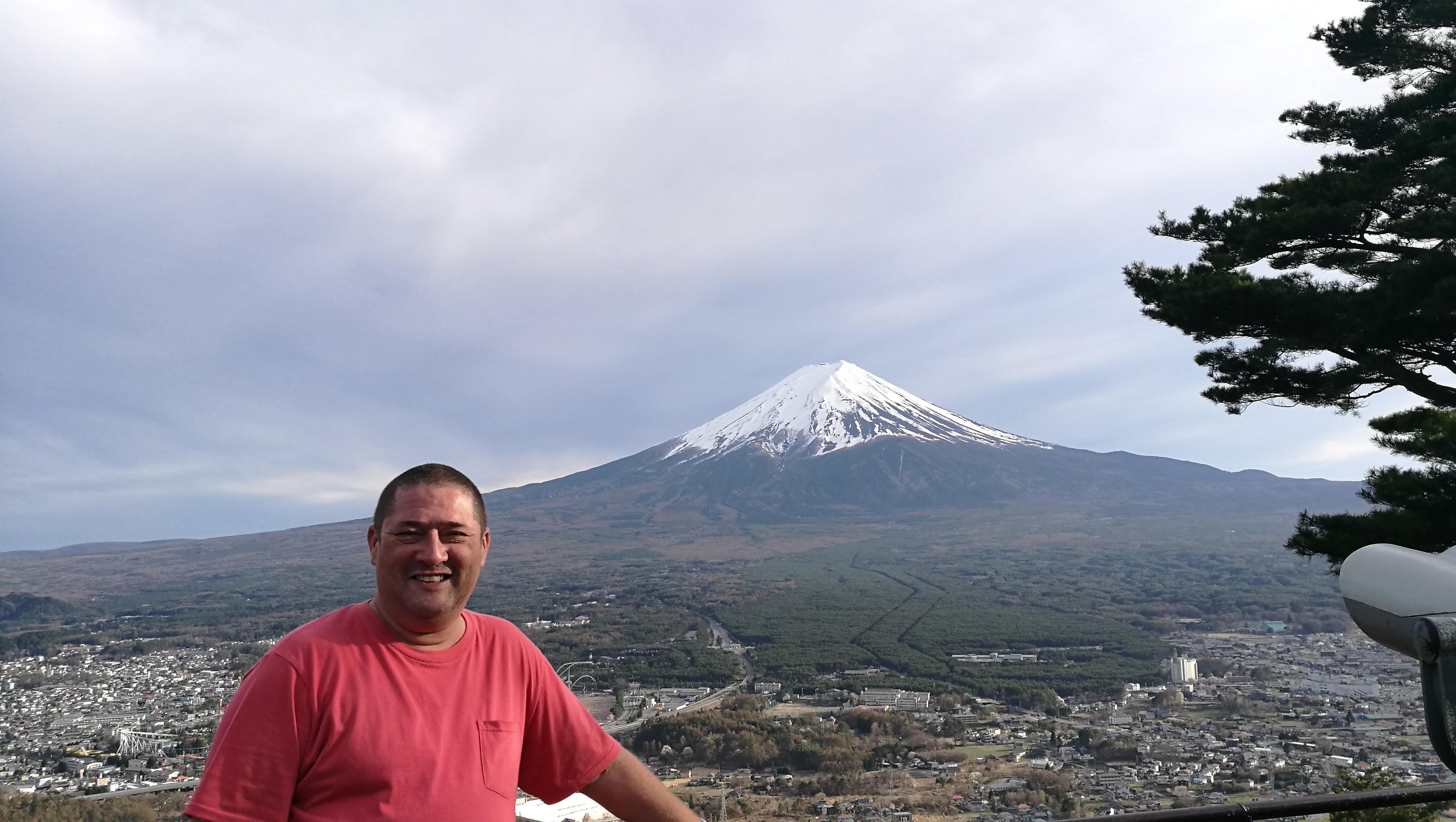 Lach on the way to Mt. Fuji

One of the most captivating things about Tokyo is how the modern and futuristic blend seamlessly with historic and traditional Japan.

Senso-Ji Temple, originally founded in the 7th century, is Tokyo’s oldest temple. It is still extremely popular for worship with local people. At the Edo Museum, we explore the period of Tokyo’s history from the 17th-19th centuries when Tokyo was a fishing village known as Edo. A highlight for our group in Tokyo was the Imperial Palace East Gardens, home to Japan’s emperor, and – cherry blossoms! Luckily we were able to see these wondrous trees in full bloom, despite it being towards the end of the brief blooming season. The classical landscapes of the Hamarikyu Gardens, a 70-year-old public park are another aspect of Tokyo that highlights traditional Japan. We were in luck once again as late-season cherry blossoms decorated the park.

There are two main religious beliefs in Japan – Shinto and Buddhism. Shinto (meaning ‘way of the gods’) is unique to Japan and is as old as the country itself. Shinto is an optimistic way of life that focuses on sacred spirits found in elements vital to life, such as wind, rain, mountains, trees and fertility. People become ancestral kami after death. Devotees visit their local shrine to keep evil spirits at bay through purification, prayer and offerings to the kami.

Tokyo’s famous Meiji Shrine also provides a fascinating insight into the timeless nature of Japanese culture. The first thing that especially strikes you is the 12m-high torii gate, which is made of 1,500-year-old cedar wood. A torii gate is a traditional Japanese gate found at the entrance to a Shinto shrine and marks the boundary between life outside the temple and the sacred within. 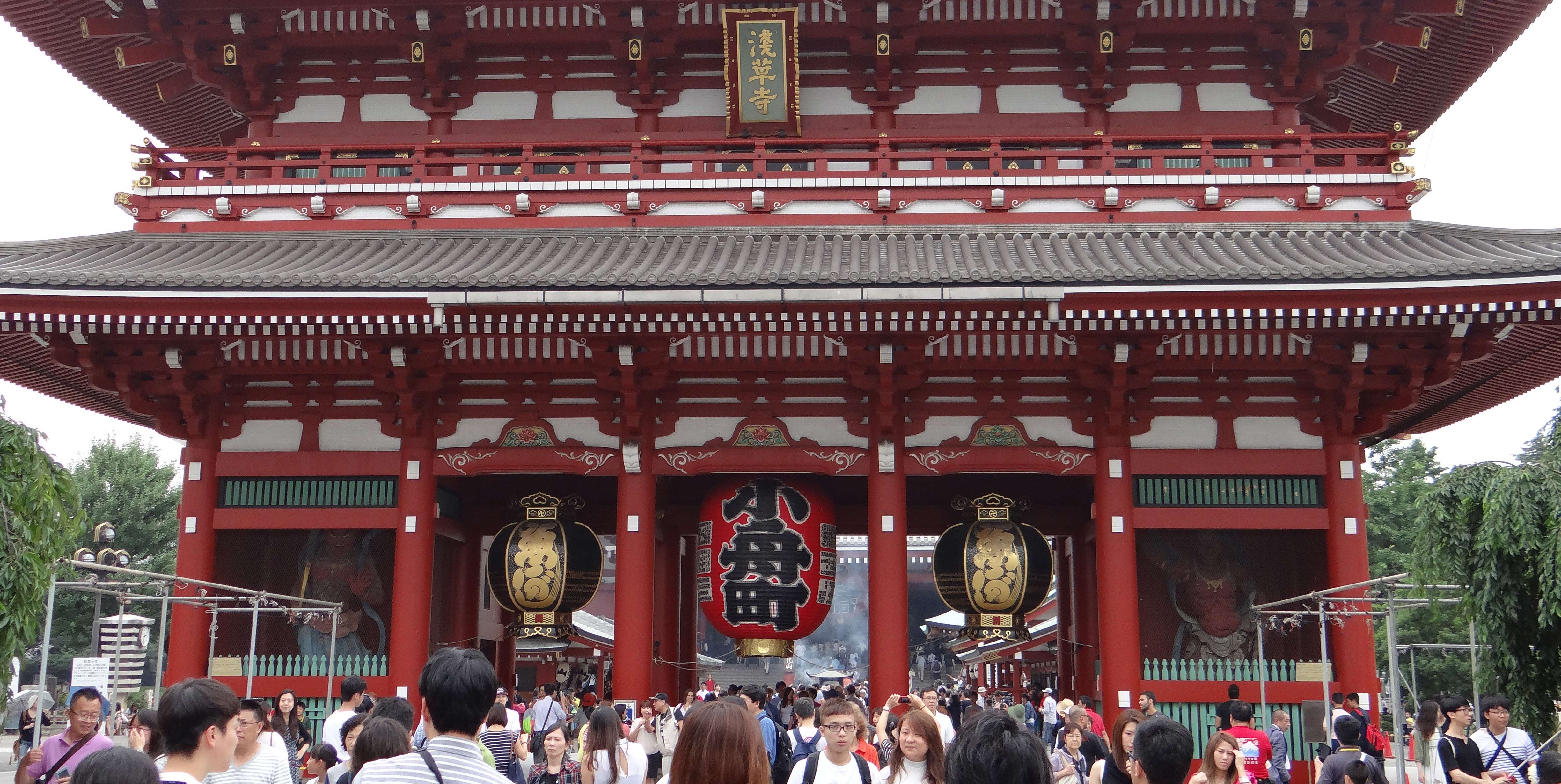 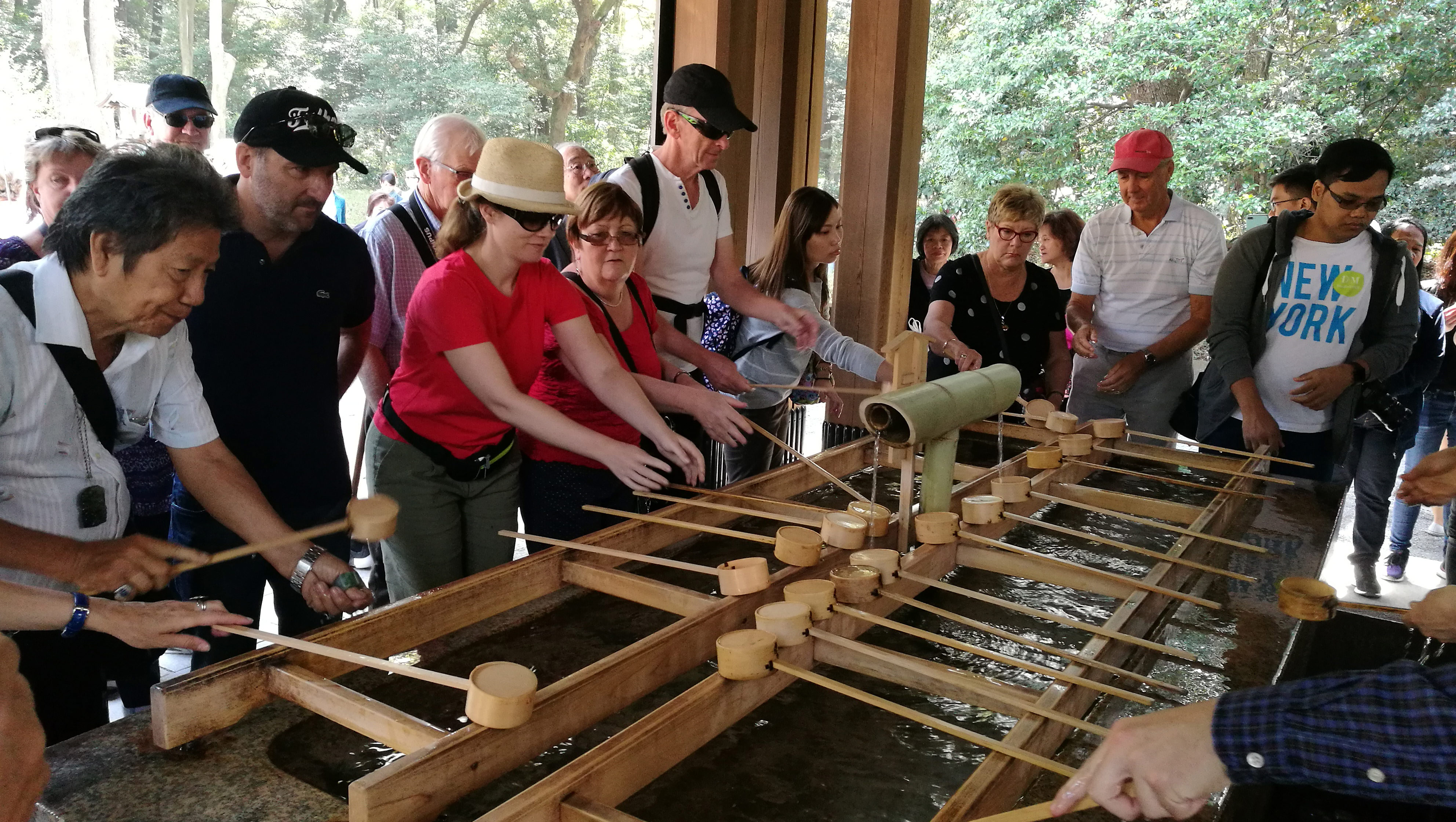 Time to leave the bright lights of Tokyo and head off to rural Japan. First stop – Mt Fuji and the Fuji Five Lakes. There is a sense of excitement, but also apprehension; excitement because Mt Fuji evokes images of one of the world’s most impressive and national icons, and apprehension because we knew how temperamental the weather can be in this area. I will never forget that moment our coach rounded a bend and there she was in all her magnificence! It was breathtaking!

We continued to a hidden spot that you’d never find by yourself where two friendly (and very funny) ladies instructed us about how to make our own soba noodles. There is laughter aplenty as we master the fine hand-chopping of the noodles! Our efforts are well-rewarded when our two new friends took our freshly-made noodles away and returned minutes later with a thoroughly delicious lunch made up of our own handiwork. It was a fantastic cultural experience to cook using traditional cooking methods and Japanese utensils and one that we may have missed if we were on an escorted tour.

The local knowledge of our Wendy Wu Tours guide has been of huge benefit. She knows the secret spots, when to go, what the weather looks like it’s going to do. We don’t miss out on anything because of her expertise. 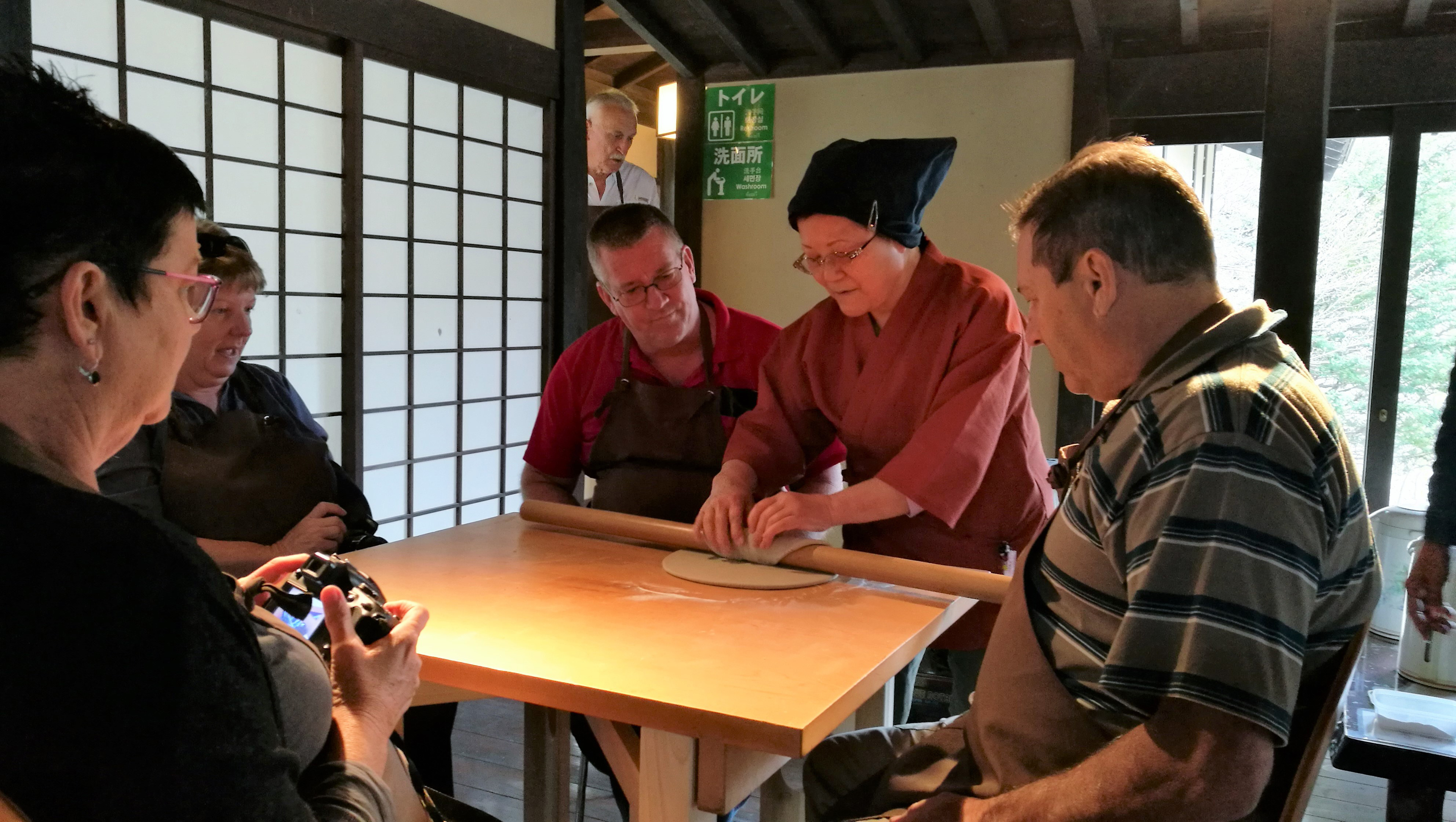 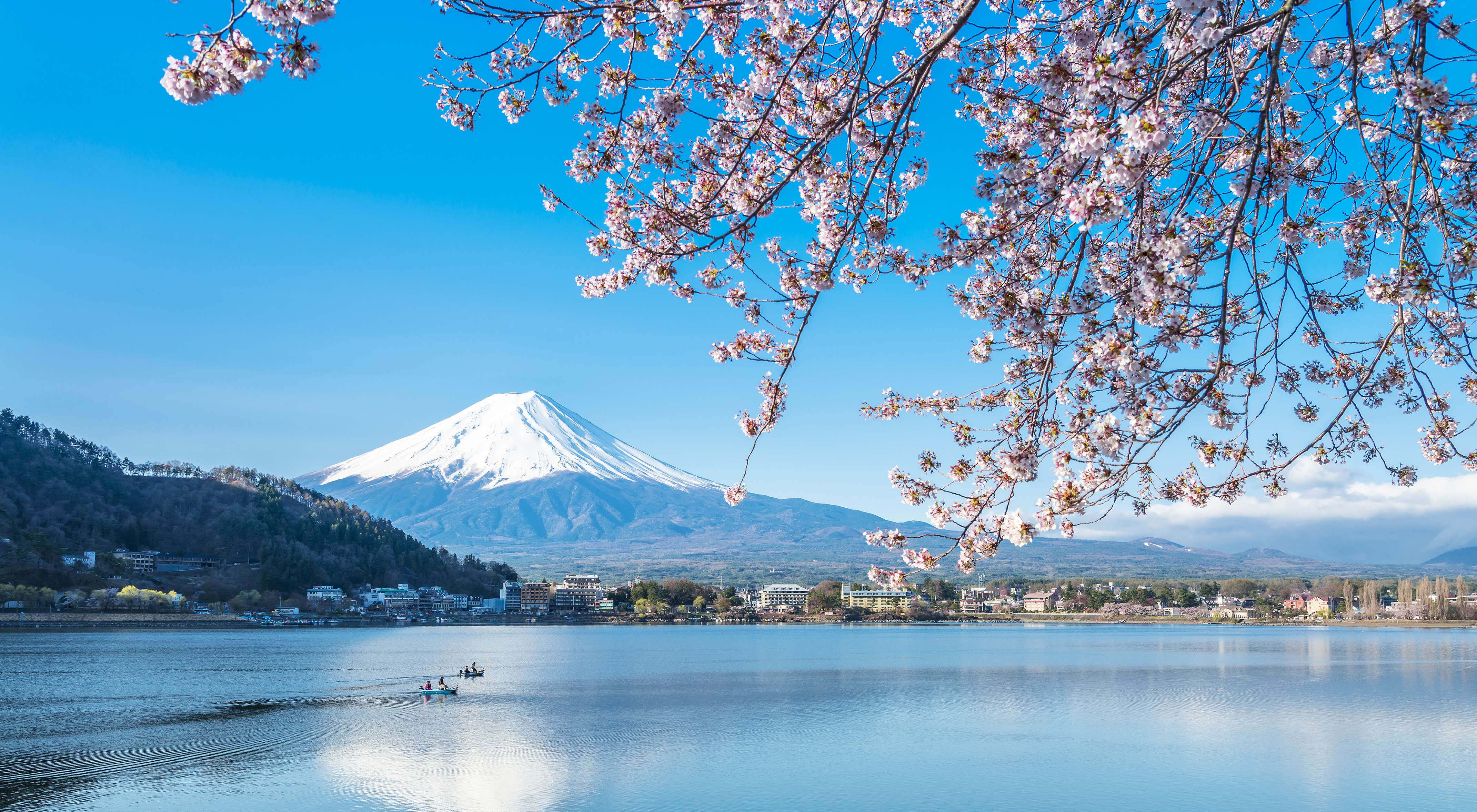 Our lodgings for two nights are a hot spring resort beside the shores of Kawaguchi-ko. Hot springs are incredibly popular in Japan. Known as onsen, they have been enjoyed by the Japanese for centuries for their health benefits and as a place to socialise too. The onsen is also segregated into male and female. Some less shy members of our group decided to take the plunge and experience the onsen for themselves. I say less shy as it is a requirement that you bathe naked, with just a tiny ‘modesty towel’. Reports back indicate that everyone felt reinvigorated after soaking in the ancient and therapeutic geothermal waters.

For those who wish to embrace traditional Japan, a visit to Iyashi no Sato is essential. Famous for its thatched houses, this historic village gives an insight into what traditional life was like. A highlight was the option to dress up in traditional Samurai regalia (for the gents) and traditional Kimonos (for the ladies). We emerged wearing our new garb of raucous laughter. We have a newfound respect for Japanese Samurais of the era – their armour and headwear were incredibly heavy – how they fought and manoeuvred wearing these pieces of equipment is anybody’s guess!

Our other stop was at Oshino Hakkai, a beautiful area of tranquil scenery featuring five large ponds that are filled with the melting snow from Mt Fuji. There are also some stunning views of Fuji from here. The small-yet-interesting museum here features Samurai swords and armour, household objects from times gone by and other glimpses into traditional Japanese life from many years ago. 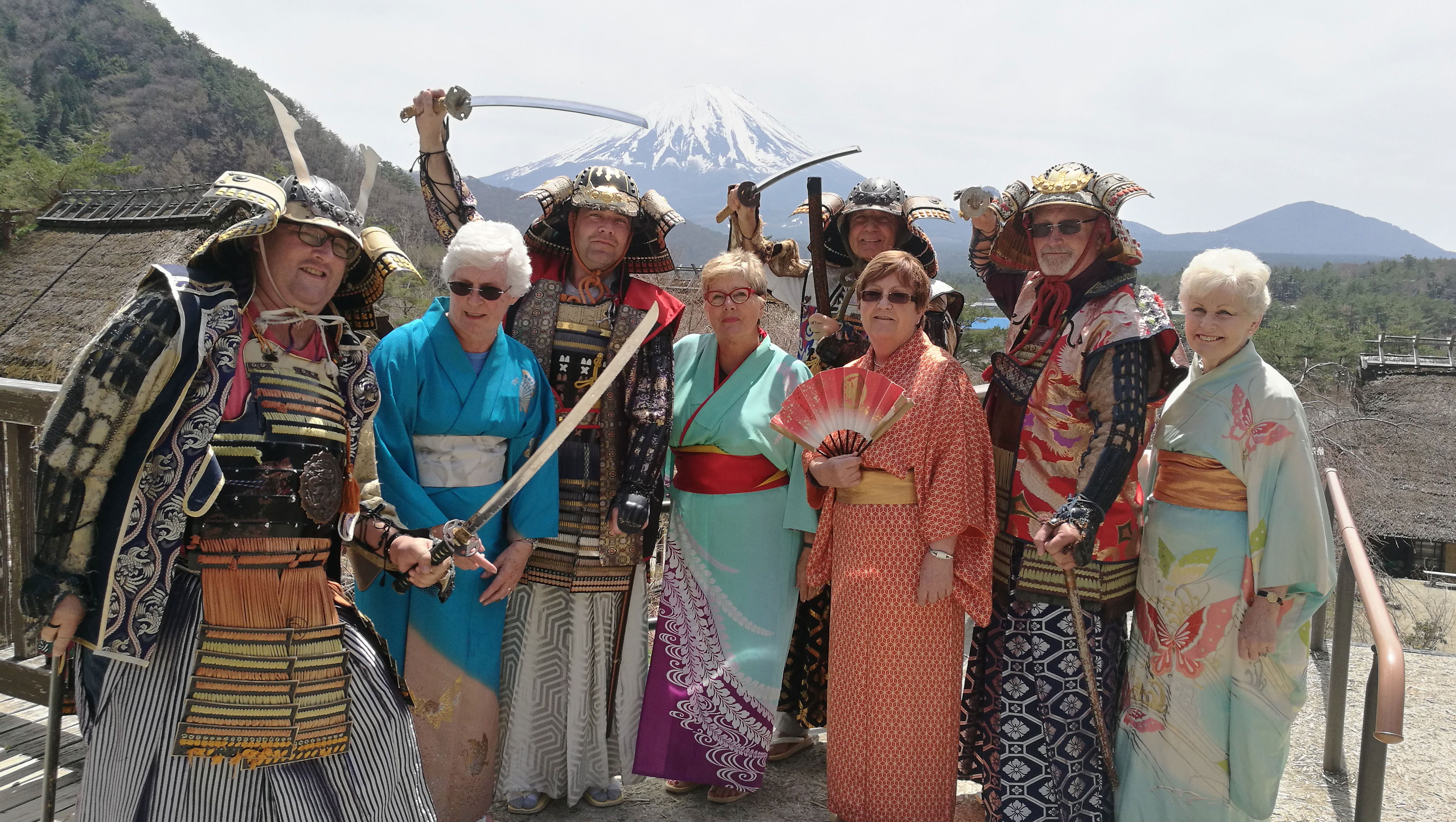 Dress Up Time in the Foothills of Mt. Fuji 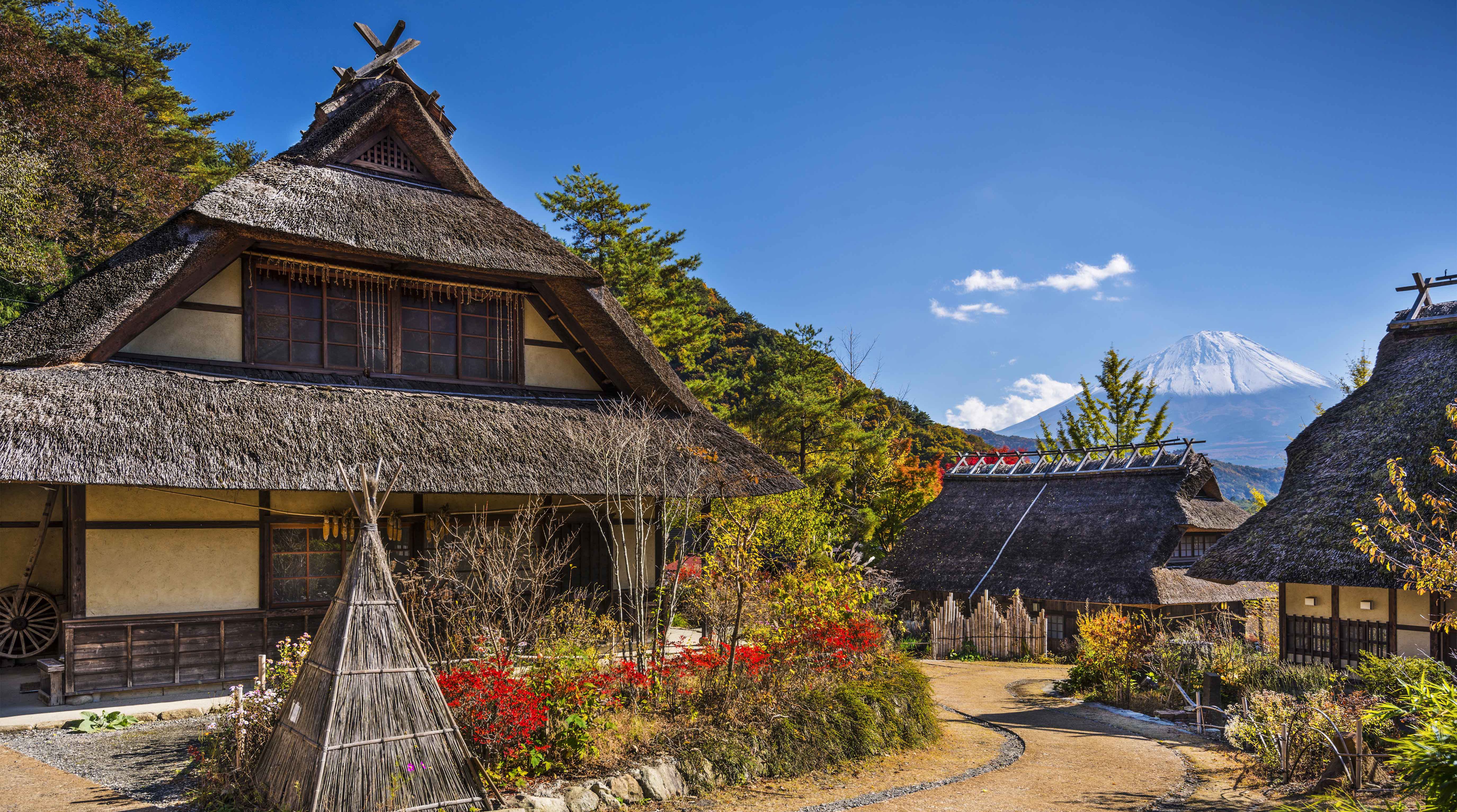 The spiritual heart of Japan

Kyoto conjures images of ancient temples and Zen gardens. Sometimes when you travel to a destination with a picture in your mind, you end up disappointed with the reality. Let me tell you, Kyoto is not one of those destinations! Kyoto is incredibly beautiful and a wonderful place to experience traditional Japan, its culture and customs.

We meet traditional Japan head-on during lunch with a genuine Maiko, an apprentice Geisha. She was beautiful and entertained us with traditional Japanese dance. As part of Geisha culture, their role includes talking with guests. Our Maiko, named Fukuya, sat with us and also answered our questions about life as a Maiko. It was a fascinating experience.

We were in for a lot of fun this afternoon as the group engaged in the centuries-old art of Japanese paper-folding known as Origami. Our teacher was fantastic at keeping her explanations simple, and before we knew it we were making our own Origami frogs and paper boxes. We also took part in a traditional tea ceremony, usually reserved for formal occasions.

Most of the temples in Kyoto symbolise the values of traditional Japan. The beautiful Ryoan-Ji Temple is a lush and tranquil escape. A beautiful, Zen-inspired rock garden is the centrepiece. Kiyomizu-Dera, a 16th-century Buddhist temple offers spectacular woodland vistas. Drink the pure water to preserve health and long life. Kinkaku-Ji, better known to most as the ‘Golden Temple’, is one of Japan’s most iconic sites. We were lucky again with cherry blossoms galore!

Kyoto leaves you with a sense of inner-peace and calmness and consequently a much larger insight into the Japanese culture and mindset. 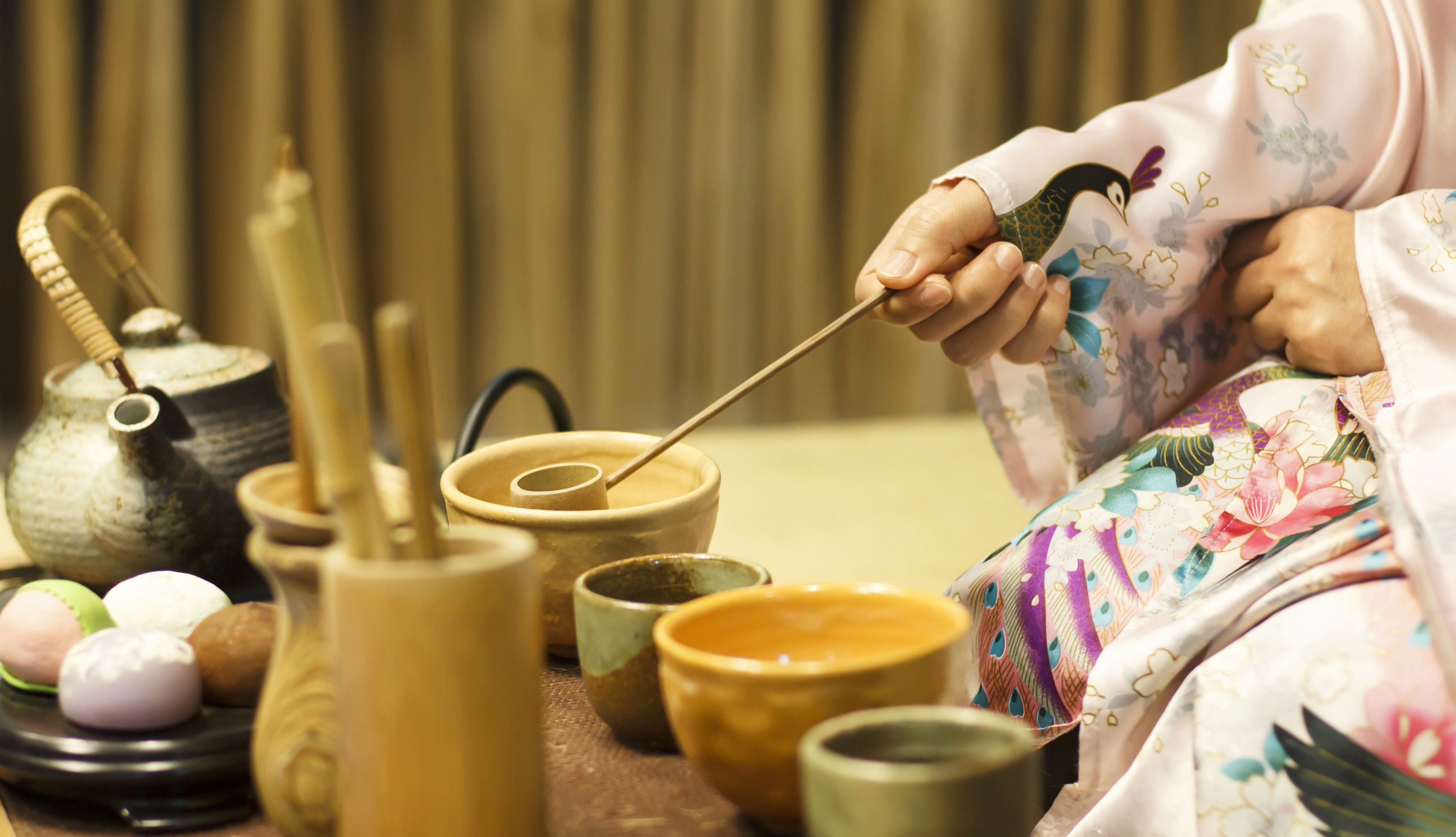 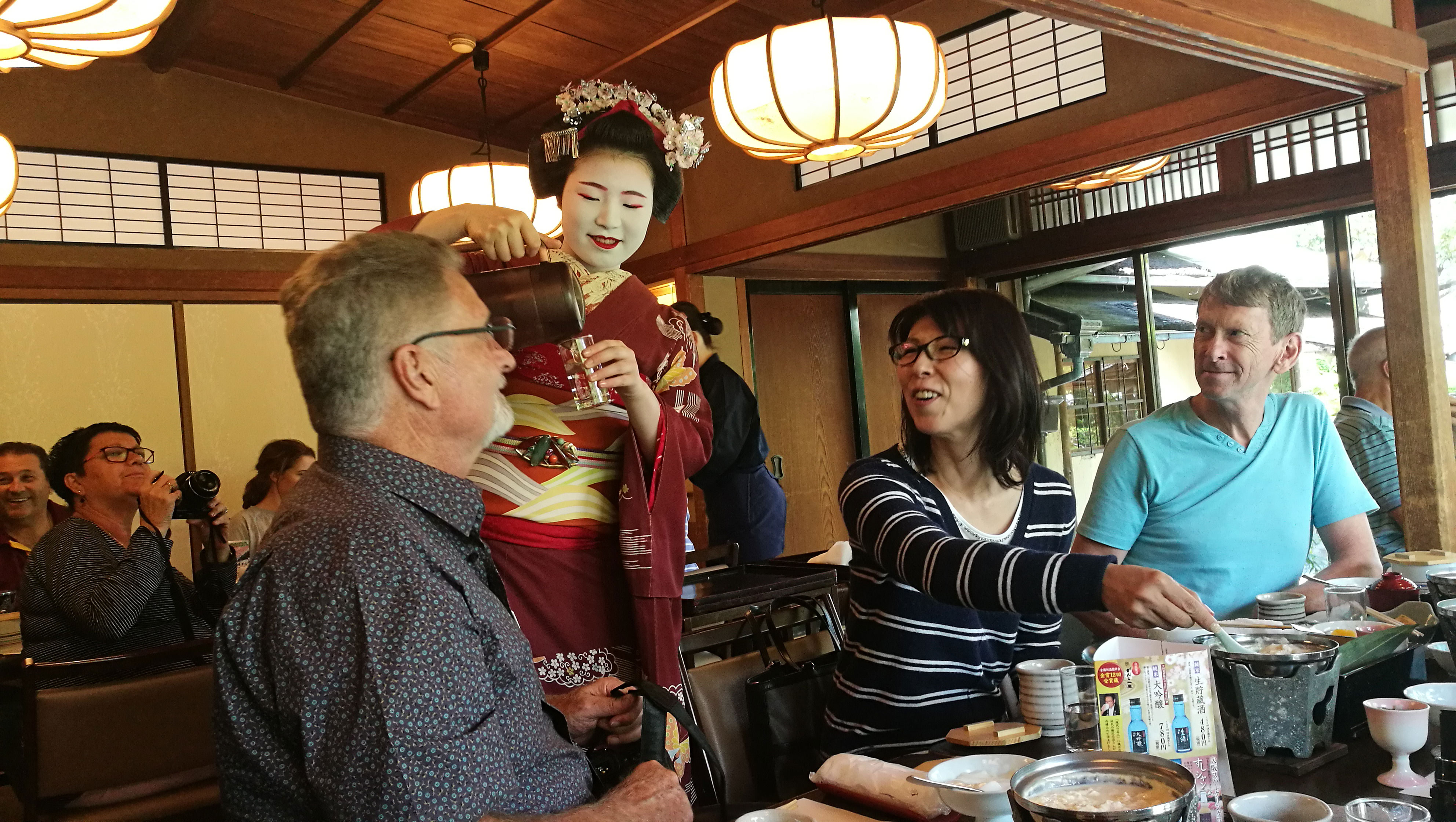 Lunch with a Maiko in Kyoto

Hiroshima is infamous as the site of the first use of a nuclear weapon on humans on August 6, 1945. It is essential to have a solemn visit to ‘Ground Zero’ at the Peace Park and Peace Memorial Museum. It was poignant and also a time for reflection to learn more about what occurred during the aftermath.

A brief, but scenic 15-minute ride across the water takes us to the sacred isle of Miyajima. This island features a beautiful Shinto shrine, Itsukushima, and a beautiful Torii gate. At high tide, it gives the impression that it’s floating on the water. It’s an iconic image of Japan.

A journey to one of Japan’s national treasures – Himeji Castle, is not to be missed. In its current form, it dates back over 400 years. This castle is sacred to the Japanese people and is largely intact from its original state. Yes, there are a number of steep staircases inside to traverse. The view from the top is magnificent and a true insight into life in ancient and traditional Japan. Similarly, the beautiful Kokoen Gardens, just next door to the castle, are a magnificent example of traditional Japanese garden architecture. I have seen and experienced so much on this Wendy Wu Tour. It’s the unique touches makes travelling with Wendy Wu Tours the way to go. I underestimated Japan. I found it captivating, entrancing and fascinating. How to sum it up? Quirky, at-times modern, at-times ancient, polite, highly organised yet a very traditional destination.

It seems like I have found a new favourite destination in Asia – I can’t wait to go back… and I know it will be sooner, rather than later!

Other blogs that may interest you:

One thought on “Traditional Japan – Step Back in Time”