We awoke early and peeped through the sheer curtains, looking up at the sky. We were elated to see that there were clear blue skies and a glistening sun. It was going to be an eye-opening day for us. After a short drive we reached the bottom of the mountain.  This was our starting point  for our hike up to the breathtaking Taktsang Monastery, also known as Tiger’s Nest Monastery.

We tied up our laces, slathered on some sunscreen, put on our backpacks, and started hiking up the valley. It took us about two hours to reach the viewpoint. Providing Chimi, our knowledgeable guide, ample time to explain the history and legends that surround this fascinating, spiritual Monastery. 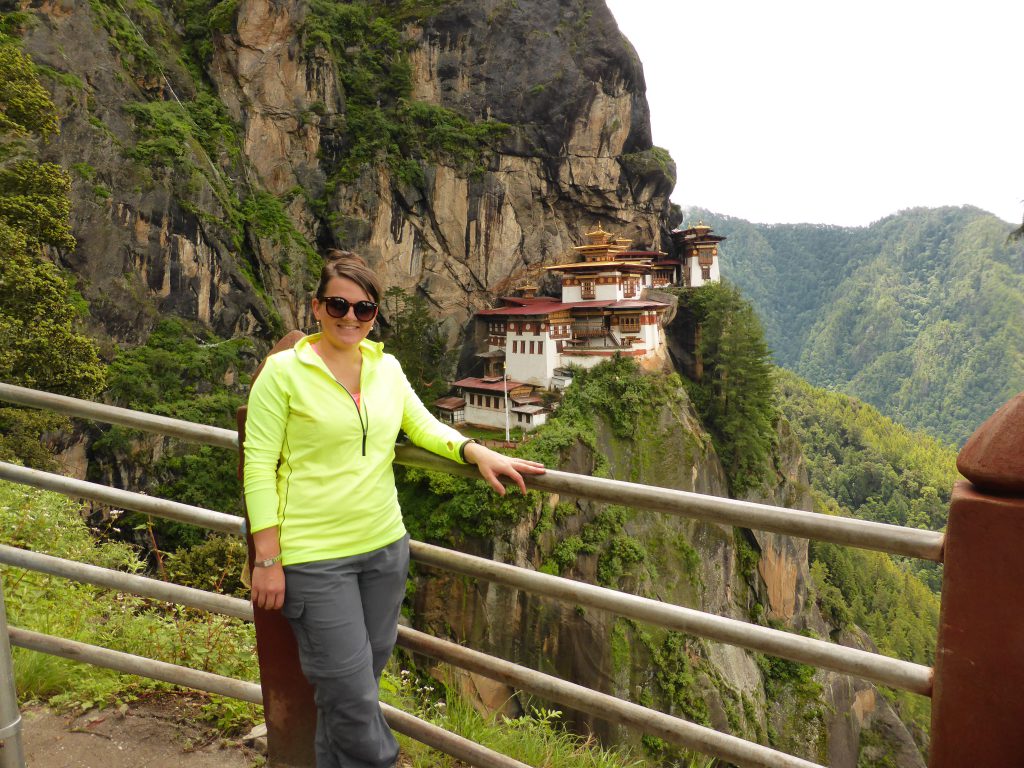 The Monastery is a sacred Himalayan Buddhist temple complex, perched 900m up on a cliffside of the upper Paro valley. Steeped in history and legend, as is much of Bhutan, some say that Padmasambhava (Guru Rinpoche) flew on the back of a tigress from Tibet, landing in this location, therefore naming the cave the ‘Tiger’s Lair’. While another legend says that the wife of a Tibetan emperor transformed herself into a tigress, carrying the Guru to the location of Tiger’s Nest.

The most popular legend tells that the temple was built here in 1692. In the 8th century, Guru Padmasambhava flew to the spot of the monastery and meditated for three years, three months, three weeks, three days, and three hours, leaving an imprint of his body in the stone, and emerged in eight incarnated forms.

Whichever legend you believe, somehow there was a tingling spirituality in the air and an ignition of the imagination that made each legend seem possible.

Tiger’s Nest Monastery was built around the Taktsang Senge Samdup cave and consisted of multiple temples. Unfortunately in 1998, a fire broke out, and destroyed the whole

complex. It was restored after the fire and reopened again in 2005. 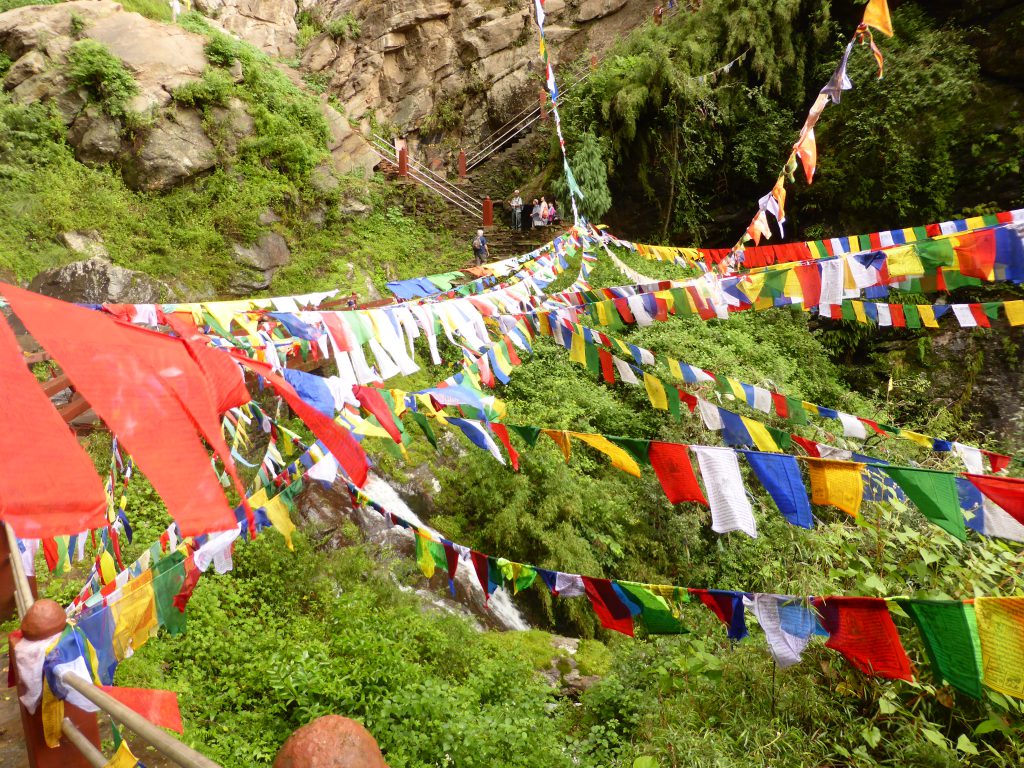 The view of the monastery was spectacular; we looked across the narrow valley, awe-struck at the magnificent structure we had been waiting to see. There was a calm spirituality in the Himalayan air. This was  to be the highlight of our trip, and it exceeded all our expectations.

After Chimi had explained the various legends, and we had taken a few hundred photos of the view, we shimmied across the gully, past thousands of rustling prayer flags and a steep gushing waterfall, proceeding up the well-trodden steps to our final destination, the Tiger’s Nest Monastery.

We spent some time exploring the individual temples, each with their own charm and intrigue. While our guide was recounting every intricate detail of each sacred temple, we were in awe of the number of stories on offer.

All too soon, much as we wanted to remain, we made our way back down the cliffside. With the gentle rumble of the waterfall, the rustling of the prayer flags in the breeze, and the stunning views over Paro valley, it’s no wonder this is the perfect place to spend some time relaxing and meditating.

Finally, once down the mountain, a local farmer invited us into their home. They heated some stones until they were piping hot, and placed them into a bath full of water, producing the most therapeutic hot stone bath one could only wish at the end of a day’s hike. The water was at the perfect temperature and provided local herbs, perfect for reducing muscle ache. They must have worked as the next day, we awoke refreshed and relaxed, reflecting on our time in Bhutan with happiness, appropriate for a country that considers itself, quite rightly, the happiest country on earth. 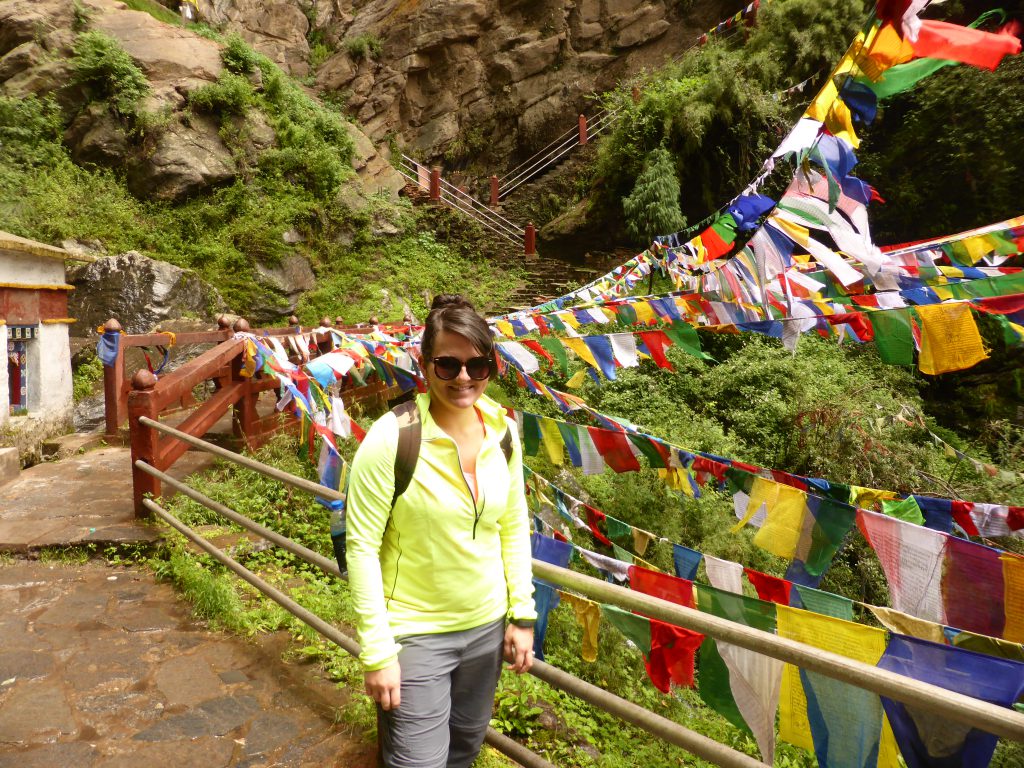 Zoe on the climb to Tiger’s Nest, Paro, Bhutan