Travelling is a great way to open ourselves up to new countries, and their fascinating cultures. One of the best ways to do so is to dive straight into the local and authentic cuisine. Say yes to the unknown and try new things, which Vietnam certainly ensures.

Vietnam, known to serve up some of the most interesting, yet tasteful foods in South East Asia fills each meal with an array of local herbs and spices, most of which are as colourful as the scenery and the people. With a diverse taste and style in each dish, you will find in different regions the tastes and flavours change.

We want to take you on a journey through the flavours of Vietnam’s three beautiful regions. 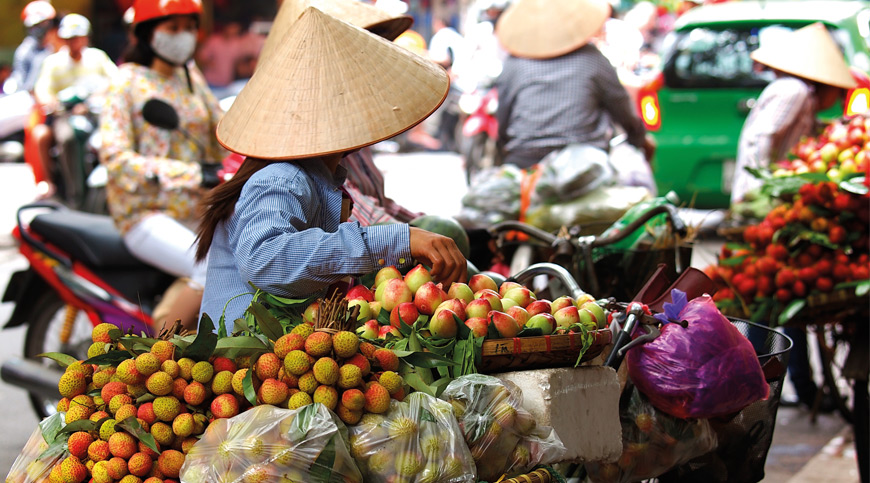 Bordering China, the cuisine in northern Vietnam is heavily influenced by it’s larger neighbour. The use of chopsticks and a bountiful selection of noodles are widely associated with the north, with stir-fry style dishes replacing rice, which is more popular elsewhere in the country.

If you want authentic meals then northern Vietnam is for you. The country’s culture originates from the mountains here and many of the ancient dishes are still created, with much emphasis on seafood and crab in particular. With the cooler climates meaning that spices are less readily available. Black pepper has a big influence, while the use of fish sauce and shrimp paste adds another layer to the flavour board.

Pho, pronounced ‘fur’ without the ‘r – is quintessential Vietnamese cuisine in a bowl. The beef noodle soup is famous all over the world and is readily available across the country. Lime juice, bean sprouts, pepper and fish sauce are the garnishes of choice, which you can add to taste.

Made with ingredients that the northern parts of Vietnam are best known for, Bún Riêu Cua is a humble dish that is sure to satisfy. The crustacean flavoured soup is made from an abundance of thickly cut tomatoes, onions, rice-paddy crabs, rice vermicelli and crab fat.

Like Pho, Xôi is another dish available throughout the country with roadside vendors, luxury restaurants and locals all creating the balls of sticky rice. Xoi is a street food by origin, a simple dish that is best enjoyed on the streets as you explore the sights.

Traditionally, Goi was reserved as a dish for special or significant occasions like birthdays or anniversaries. The salad is delicious and a far cry from the everyday green-leafed variety that we may be used to in western society. These may include beansprout, papaya, cabbage, pickled carrot, crushed peanuts, cilantro, mint, lime, chilli peppers, and more, it’s amazingly refreshing and tasty. 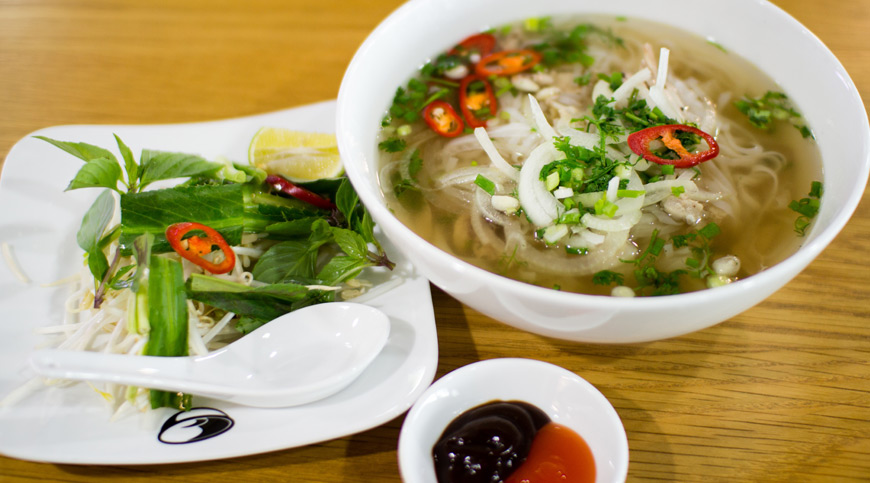 Notably sweeter and spicier than the cuisine on offer in the north, the food in southern Vietnam is light and smooth on the pallet. With waves of Cambodian and Thai flavours, the food is believed to be a reflection of a more laid-back way of life down here.

Blessed with an open coastline, this is the region for the freshest fish, squid, shrimp and prawns which are often accompanied by sweet coconut milk and sugarcane – a homage to the Thai influences.

In the south, you will have your choice of grilled fish and rice designed to be light and delicate in the heat. You are offered happy dishes, happy faces and happy stomachs. The food here looks like it was prepared with a smile on the chef’s face.

Few dishes reflect the richness of the local area’s natural resources better than the Canh Chua. A tangy and beautifully balanced soup encapsulates the abundance of fruit and seafood in southern Vietnam. Fish, pineapple, tomato, bac ha (taro stem) rice and herbs all come together in a simple dish that knows what it is: hearty, tasty and soothing.

As well as the large dishes like Canh Chua and Bún Riêu Cua, the plethora of street food and snacks in Vietnam means there is a huge amount of small bites to try.

Bánh Khot, small crispy savoury pancakes, can easily become your guilty pleasure while on a Vietnam holiday. The mini pancakes of rice, turmeric, herbs, coconut milk and topped with onions and a shrimp or prawn are often served with vegetables and a spicy/sweet dipping sauce.

Crispy on the outside and soft in the middle, they are a speciality of the Ba Ria-Vung Tau province and are often eaten when rolled up in a lettuce leaf and dipped.

The big cousin of Bánh Khot, Bánh xèo are large savoury crepes filled with the finest tastes of Vietnam. More widely present in restaurants, they are often called the Vietnamese ‘pancake’. But you’ve never had a pancake quite like this. Packed full of meat, shellfish, fish, vegetables and herbs, choose from a variety of dipping sauces and you will never settle for lemon and sugar again. 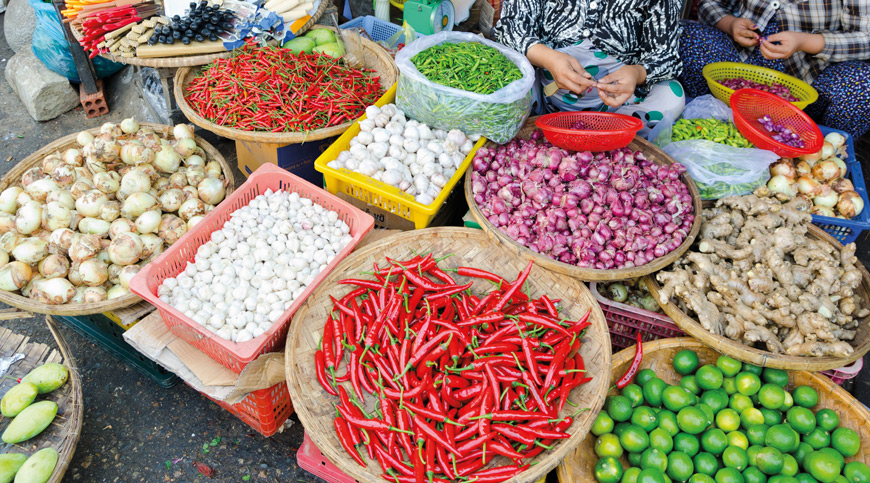 While the Chinese influence is felt in north and Thai in the south, the French’s impact on Vietnam remains in the cuisine in the centre of the country. If you are doing a tour of Vietnam through its food alone, crossing from the north into the centre, you will most likely be knocked out by a wall of spice and tropical flavours in the most complex dishes across the country.

Dishes are smaller here than the north. What they lack in size, they certainly make up for in taste and appearance. The colourful plates are complex and often come in a number of servings, with a selection of appetizers. You may find meals with an array of small portions presented sophisticatedly all at the same time, taking on their French influence. Take note of the change in style as well. Moving from the warming stews, you will be presented with lighter, brighter cuisine.

Bánh Bèo is really Vietnam’s take on tapas. Cram packed full of flavour and served in small bowls, they are steamed rice cakes served with a selection of tasty bites and drizzling of sauce. The rice cakes themselves can be savoured individually. Bánh Bèon really comes alive when chopped vegetables, shrimp, fried shallots, cubes of fried pork fat (tép mỡ) and fish or shrimp paste is added.

This is one of the legacies left behind from the reign of Emperor Tu Duc from the imperial city of Hue, central Vietnam. This delicious little bowl is an eclectic array of flavours and textures and is a very popular mid-meal snack.

Considered to be central Vietnam’s must-try noodle based dish, Mì Quảng is a thick and succulent dish. A rich broth including wholesome noodles. One part salad, one part noodle soup, Mì Quảng has a rich meaty flavour.  Which is balanced with crunchy vegetables and added spices.

It is an iconic central Vietnamese dish synonymous with hearty street food. Found in an area which once was reserved for the impoverished, and is now enjoyed by everyone across the world. The meat of the dish depends on where you choose to eat. If you go for the authentic, street-side experience then expect chicken or white fish. In restaurants, it may include pork or even beef. Named after its native province, Quang Nam, it is often served with crumbly rice crackers, dips and green side salad.

As we have already noted, Vietnamese food has been distinctly influenced by China. One would imagine that Cao Lầu is a dish that has its roots firmly planted there. But that isn’t the case. Despite its Chinese style, the origin of the dish actually remains a mystery.

The most authentic Cao Lầu comes from Hoi An, and cannot be replicated outside of the town. Not so much due to a secret recipe as the locals are happy to share it. It is because the water used is drawn from the Ba Le well dug by the Cham people. A lye solution is used in the preparation for the noodles that come from the trees on Cham Island. Ash from the burnt trees is then mixed with the water. This gives the noodles their texture and the distinct hint of yellow.

Cao Lầu is a real treat and represents centuries of trade and migration. Served with slices of roast pork, the thick noodles are seasoned and mixed with specific herbs, bean sprouts and greens.

To get a true taste of Vietnam you need to be open-minded. Be willing to try new things and be willing to visit places you would never have considered before. You can be sure to have an unforgettable culinary experience from the street food alone. Remember to always follow the crowds because after all, if a place is busy then it must be good. Avoid playing it safe with sit down, formal restaurants and immerse yourself in the culture of the city or town. Sit with the locals outside the food vendors and enjoy what the locals eat. If you do this you are sure to experience a real taste of Vietnam. 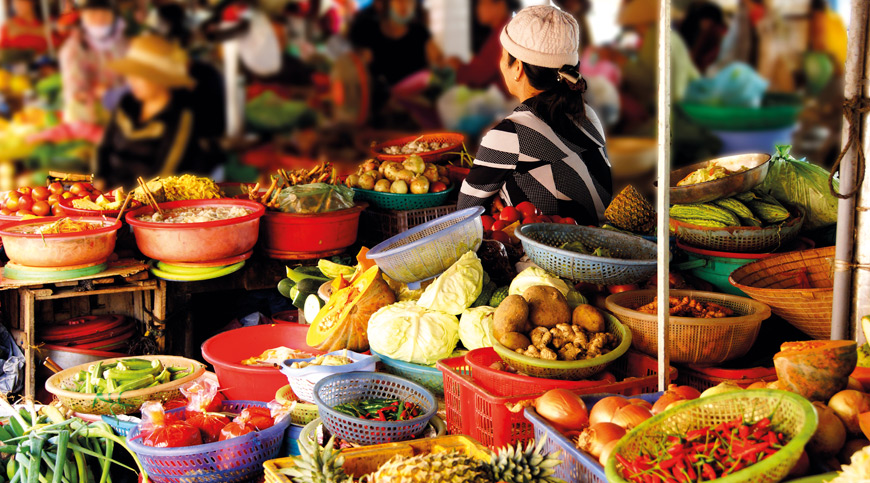