India’s Taj Mahal is renowned as the eternal monument to love and is high on the list of must-sees for most visitors to India.

Travel writer and TV presenter Adam Ford took a while to feel the love on arrival at the Taj, but went on to enjoy a magical morning…

The Indian official stationed at the West Gate peers at me, my cameraman, our minder and our precious paperwork with equal measures of suspicion. In preparation for filming here in India with Wendy Wu Tours, we have carefully dotted our ‘i’s’ and crossed our ‘t’s’ with the relevant government departments, but as is always the case in India, expect the unexpected! 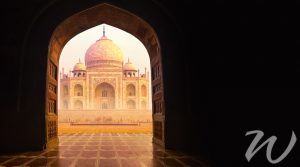 Viewing the Taj from inside the Red Mosque

As we hurry along the paved forecourt towards the Great Gate, there are already hundreds of people milling about.

We’ve arrived early to beat the crowds. So it seems, has everyone else. Visitor numbers at the Taj Mahal can top 100,000 a day. But there’s a sense of relaxed ease in the air, with many a shy smile in our direction. It’s one of the greatest joys of travelling to India. Wherever you go the people are warm and welcoming.

When we left our hotel around 5.45am this morning a thick mist hung over Agra and there was much concern about whether our views of the monument would be impeded. We needn’t have worried. The fog has lifted and we are bathed in soft morning light. It couldn’t be more perfect. 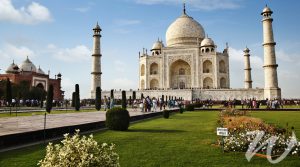 The surrounding gardens of the Taj Mahal

It’s difficult to describe your first sight of the Taj as you pass through the Great Gate and out onto a podium a metre or so high.

The mausoleum with its domed roof and four delicate minarets sits perhaps two hundred metres away. But it actually seems to float before you on the axis of the pure symmetry we’ve come to expect from the mighty Mughal emperors.

The Mughals ruled India for two centuries. They left behind a legacy of grand monuments probably unsurpassed anywhere else in the world. On this nine-day tour of Delhi, Agra and Jaipur (known as the Golden Triangle) we will see many of them – beautiful Humayun’s Tomb in Delhi (said to be the inspiration for the Taj Mahal itself), the solid strength of the Agra Fort and the majestic Tomb of Akbar the Great on the outskirts of Sikandra. But nothing compares with the shimmering splendour before us. 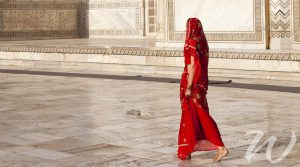 A saried lady wandering past the Taj

In the countless images you may have seen of the Taj Mahal, it looks like the building stands on its own.

It doesn’t. There are a number of other tombs and buildings, and a wall around the entire complex. The crowd flows down into the garden and along the path that follows a long, thin reflecting pool all the way to the square podium on which the mausoleum sits. Brightly coloured saris flap in the breeze, creating a kaleidoscope of vivid colour against the pristine white marble of the monument. Our group spends the next couple of hours exploring the site at their own pace.

The Taj Mahal was built by Mughal emperor Shah Jahan around 1632 to 1653, to honour his beloved third wife Mumtaz Mahal who died giving birth to their 14th child. While she would have known that a monument would be built in her honour in the event of her death, it strikes me as incredibly sad that Mumtaz never saw the timeless tribute that would immortalise her name.

Shah Jahan was later imprisoned by his own son in the nearby Agra Fort until his death in 1666. His cell offered only a distant view of his prized creation. 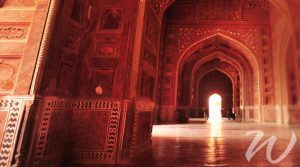 Inside a Red Mosque

Today the spirit of Shah Jahan’s love for Mumtaz lives on.

Young lovers stroll hand in hand around the grounds, while families pose proudly for photos. Upon the main podium, young girls laugh as young men leap in the air. Curling their legs up behind them for that perfect selfie floating on air. It’s absolutely charming.

As we head back out through the West Gate we pass the same official. He eyes our camera and gives me an inquisitive look. I nod. Yes, all good, thank you. To my surprise, he gives me a wide smile before returning to his duties. Love is in the air at the Taj, even at the gate as it turns out.

Adam Ford is a travel TV presenter, writer, blogger, commentator and editor of The Big Bus tour and travel guide.

Take Me There: Golden Triangle

This tour visits Agra, Jaipur, Delhi and more on a trip through India’s vibrant history.