Our new brochures are out now!

Fly free to Japan and save $1,050 per person when you book a selected tour to Japan. 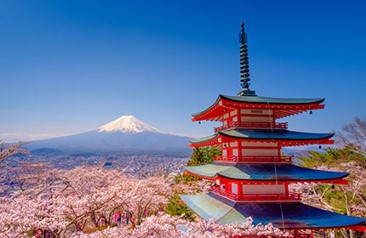 Join the Wendy Wu Tours experts online as they journey through Japan showcasing the nation's most spectacular time of year, the stunning cherry blossom season. Meet the experts in our fun Virtual Party Room, learn all about the cultural significance of the season and enjoy an exclusive offer.

Osaka is Japan's third largest city, and this long time capital of commerce is filled with down-to-earth citizens and neon-clad streetscapes. Located in the west of Japan, Osaka is most famous for great food and has also been known as the "nation's kitchen,” due to its fabulous restaurants and nightlife.

Osaka is the paradise for foodies and shopaholics. The phrase ‘kuidaore’ meaning one should eat until he drops, is heard so frequently here that it's almost the city motto. Osaka people take food seriously, and they have fun preparing it and eating it. Local delicacies include savoury pancakes and the ‘conveyor belt’ sushi was invented here. In addition, there are many specialty shops where you can buy both modern and traditional wares in this amazing city.

Osaka has a long history and in the 16th century, Toyotomi Hideyoshi decided Osaka should be the home for his castle. At this time the city nearly became Japan's capital! The castle today is one of the highlights to explore, not to mention the Osaka Aquarium Kaiyūkan, night-time scenery of the Dōtombori area, the retro stores of the Shin-Sekai neighbourhood and the tranquil open-Air Museum of Old Japanese Farmhouses. But Osaka's real treasures are in its bustling street life in its arcades, markets and byways, and after dark Osaka really comes to life, when locals come out for tasty eats and good times.

The best time to visit Osaka is between March to August and especially in the spring, when the Cherry Blossom is in full bloom.

Things To See In Osaka

No trip to Osaka would be complete without seeing one of the wonders listed below.

Osaka offers a wealth of wonderful sights and experiences. What better way to explore them than on a Wendy Wu tour?

Osaka at a Glance

We all enjoy a good fact or two - here are a few useful ones about Osaka:

Don't just take our word for it

Thank you for your enquiry regarding one of our tours or destinations.

One of our expert Personal Travel Consultants will be in touch shortly by email or telephone to discuss your holiday requirements further.

We hope to welcome you on a tour soon,
Wendy Wu Tours